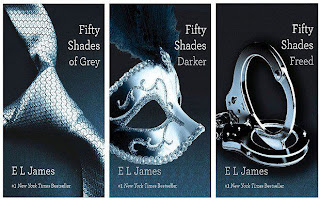 This book was my second favorite of the trilogy but I really loved it.....for the most part. Twenty-one year old virgin with no past Anastasia Steele was a little whiny, weepy and emotional for me, as I tend to be drawn toward stronger, more relatable female characters. I did envy her ability to completely change a man who was shut off from all emotional attachments to women into a man who could not live without her in just a matter of months.
Christian Grey is the ideal male character for women to completely fall in love with and want to smack the shit out of at the same time. In the end though, Mr. Grey is a keeper- no doubt about it. Sometimes this book's dialogue left something to be desired and the repetition of certain phrases could be unnerving, but the story pulls you in and keeps you there throughout. I definitely could have lived without the Inner Goddess and the Subconscious but for some they are a welcome distraction from the heavy emotion of some scenes in the book. The emails? BEST part of the entire series, by far.

The second book in this trilogy was the best in my opinion. It gave us background into the lives of both Christian and Ana, allowed us in to more of their love story and less of the constant sex, and the writing in this story was much better than the first book. There was drama, suspense, the addition of the drama that IS Mrs. Robinson and made us fall in love with Christian again and again....and then want to kill him for Ana when he kept messing up. LOVED this book!

This one was somewhat of a disappointment to me. It felt very rushed and while some parts were discussed in so much detail it became a bore, others that you want so much more of are skimmed over without so much as a second mention. Although the end wraps up with a pretty little bow and a happily ever after for Christian and Ana, I think this book could have been developed much better to give a more well-rounded story to the reader. I would still recommend this series to anyone that wants a great love story and some red room of pain action. ;) 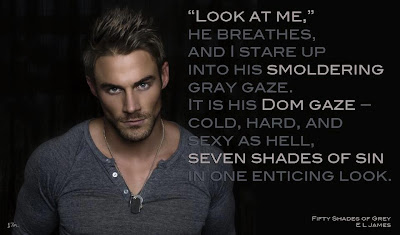 Posted by Unknown at 8:29 PM No comments: