Torture
Rose has a job.To protect her nephew, Charlie. A hot motorcycle thug isn't enough of a reason to get in the way of that.
Except the one who saves her from a torture so vile, she doesn't know who she is anymore.
Drake is determined to take Charlie from her, and he'll play dirty to do it.
Noose is justas determined to protect her from the Road Kill's number one rival MC.
Can he do it when she denies his protection?
Rose will not end up like her sister Anna.
Dead.
Rose soon discovers there are worse things than death.
Circumstance
Noose's life has been turned upside down.
Rose Christo is more than she seems, and involved in way more than she should be.
When a certain Chaos Rider kidnaps her as a means of coercion, Noose finds he's willing to tie a knot especially for Diablo, aka Drake.
Not to kill--to warn.
But Noose wasn't put on this blue marble to warn men who threaten his property.
Even if the woman that's his property, doesn't know it.
***NOTE: Please be aware that KNOT is part two of three, and ends in an HEA with ROSE, coming March 2016.

Just another one night stand…
Ryann despised the thought, but it was the only one she could draw when she woke up in an empty bed. Tired of being let down by everyone she cared about--aside from her brother--Ryann begins taking her life back, pushing back at all the bad and ugly life tosses at her.
Ryder knew the moment he left Ryann alone in bed he’d made a mistake. Running and hiding from his family for years, Ryder didn't want to pull her into that life. She deserved more than constantly moving from place to place.
Ryann just can’t push again. Life is winning and she just wants to lay down and give up. Now, she must make a decision: to run from the truth, or step up and admit what she’s known all along. And Ryder... nine months later and he can’t get Ryann out of his head. He wants her more than he wants to run.
But there's a terrible truth he has to face: it might be too late for Ryann to give Ryder his second chance.

Rebecca lives near the shore towns of New Jersey, with her husband and two kids. When she's not writing she loves reading and watching SOA and TrueBlood.
Website * Facebook * Twitter
Hosted By:

Meet Colton Wade, FMX rider...
I’m just a small town guy who caught a lucky break. Now I’m living the dream, on the brink of high-flying super-stardom. But something’s missing.
That something is Taylor.
She’s my best friend. The one who makes me want to push harder and higher. The one I fall back on when shit gets tough. The one I’d give it all up for.
I’d do anything to protect her. To make her dreams come true too.
But a single night changes everything.
And now the one she needs protection from...is me.

Forced With the Rogue Cover Reveal

Finn Balfour had everything he ever wanted sitting in the palm of his hand. He was the tracker for a pack that any wolf would be proud to be a part of, but most importantly, he had a mate he loved more than anything is this world.
Everything changed the day he was cursed into the body of his pack’s sworn enemy.
Blair Balfour had never been happier. She was finally able to overcome her past, and for the first time in her life, she was surrounded by friends and family. Best of all, she was married to her shifter mate and madly in love.
However, everything changed the day he died.
When Finn returns from the dead in the enemy’s body, will he be able to convince Blair that it is really him and win back her heart? Will she be able to love him completely again, or is her grief-stricken heart to remain shattered?
Will instantaneous lust and desire be enough for Blair to open her heart again, or will Finn have to settle for her body alone? 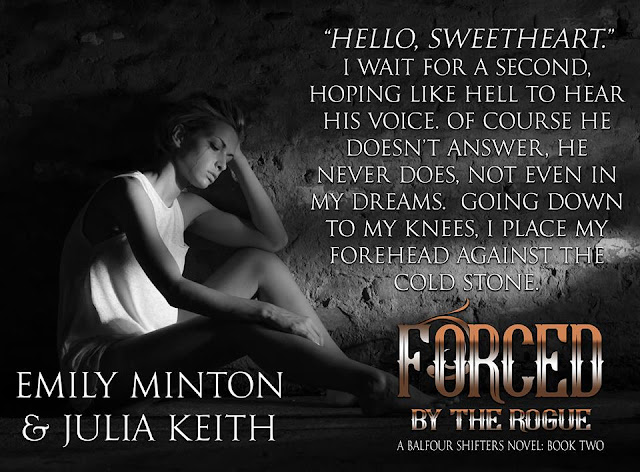 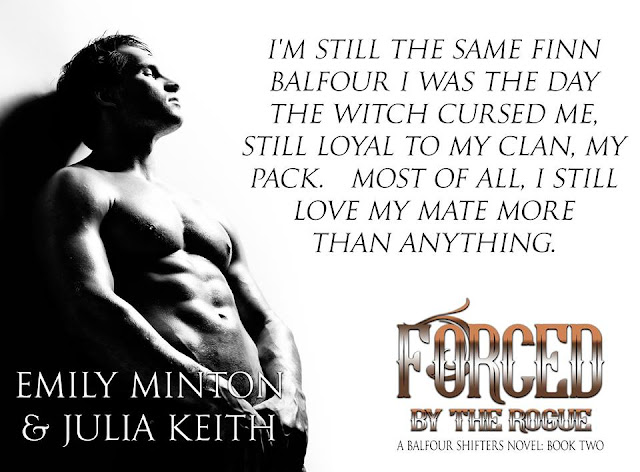