Toward the Sound of Chaos Teaser and Book Blurb 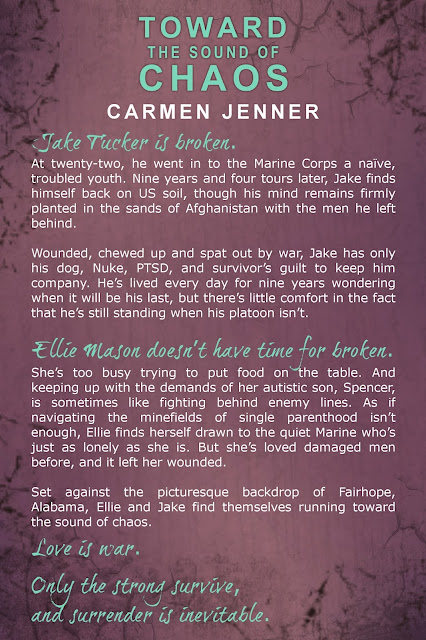 BLURB
Toward the Sound of Chaos


Jake Tucker is broken. At twenty-two, he went
in to the Marine Corps a naïve, troubled youth. Nine years and four tours
later, Jake finds himself back on US soil, though his mind remains firmly
planted in the sands of Afghanistan with the men he left behind.


Wounded, chewed up and spat out by war, Jake
has only his dog, Nuke, PTSD, and survivor’s guilt to keep him company. He’s
lived every day for nine years wondering when it will be his last, but there’s
little comfort in the fact that he’s still standing when his platoon isn’t.


Ellie Mason doesn’t have time for broken. She’s
too busy trying to put food on the table. And keeping up with the demands of
her autistic son, Spencer, is sometimes like fighting behind enemy lines. As if
navigating the minefields of single parenthood isn’t enough, Ellie finds
herself drawn to the quiet Marine who’s just as lonely as she is. But she’s
loved damaged men before, and it left her wounded.

Set against the picturesque backdrop of
Fairhope, Alabama, Ellie and Jake find themselves running toward the sound of
chaos.
Love is war.


Only the strong survive, and surrender is
inevitable. 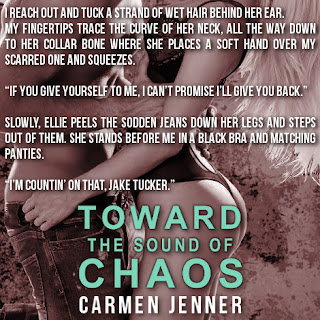 Pre-order links not yet available 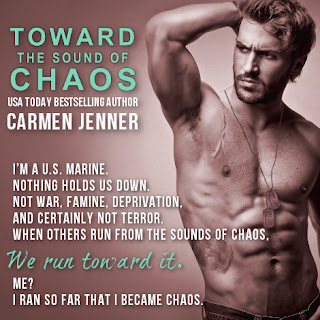 AUTHOR BIO
Carmen Jenner is a thirty-something, USA TODAY and international bestselling
author of the Sugartown, Savage Saints, and Taint series.
Her
dark romance, KICK (Savage Saints MC #1), won Best Dark Romance Read in the
Reader’s Choice Awards at RWDU 2015.
A
tattoo enthusiast, hardcore MAC addict and zombie fangirl, Carmen lives on the
sunny north coast of New South Wales, Australia, where she spends her time
indoors wrangling her two wildling children, a dog named Pikelet, and her very
own man-child.
A
romantic at heart, Carmen strives to give her characters the HEA they deserve,
but not before ruining their lives completely first … because what’s a happily
ever after without a little torture?
http://www.carmenjenner.com