A smorgasbord of sweet butts, one for every taste.

Noose has a sweet tooth that won't quit, and a clubwhore to suit his every need.
Being a part of the Road Kill Motorcycle Club isn't a hard choice for Noose. A former Navy Seal and expert knotter, he's seen realtime choices—in circumstances most never do.

It's killing road. Women and freedom are the benefits of being a one percenter.
Until Rose Christo comes along and slams the brakes on his outlaw existence.

Murder stole her sister, and gave her a son that's not hers.
Love doesn't come in neat packages; it comes in the form of a five-year-old boy.
Love is packaged in a man that tears out her heart with a brutal sexuality that strips Rose of her most sacred vow.

When her sister's murderer comes calling, demanding his property, who does Rose trust? 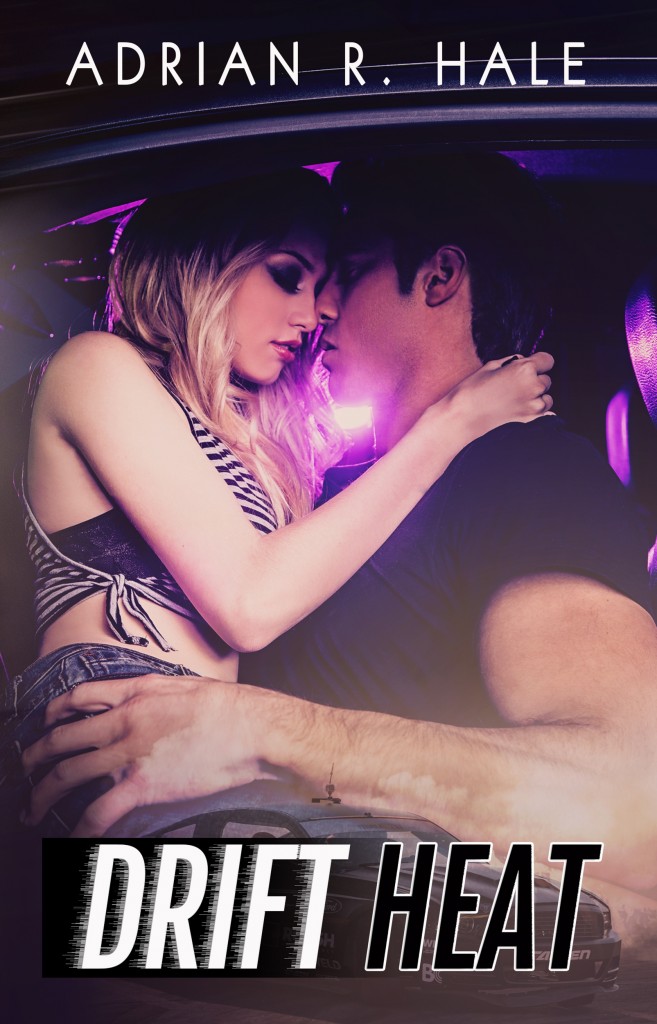 I didn't want to only be known as the pretty, blonde daughter of a famous race car driver. I wanted to make a name for myself and I wasn't going to let anyone get in my way. So when I saw the opportunity of a lifetime, I jumped. Being the face of the hottest new racing team in the business was a dream come true.
Until he showed up.
Griffin McGregor. Bad boy star driver. On the track, he's gold. Off the track? He's everything my daddy ever warned me about. Infuriatingly egotistical, explosive temper, argumentative know-it-all...why does he have to be so freaking hot?
It'll be a miracle if we can get this team to the championship title without killing each other. Or worse. Because the last thing I'm going to do is wreck my career by jumping in bed with a race car driver.

“If you wanted to dance, sweet thing, all you had to do was ask,” Wyatt says, turning me in his arms and immediately moving us to the beat. “Griff, get over here and give this girl something to grind on. I bet you a thousand bucks it will be the highlight of your night and totally worth it.”

I make to cover my face in embarrassment and move away, but Griffin is there, capturing my wrists in his hands and forcing his thigh between mine. My hands find his shoulders tentatively, and once again I am sandwiched between these guys who want nothing more than to get me off, now that they know they can.

“Just relax, you’re too stiff,” Wyatt says in my ear as he massages my hips. I giggle because it tickles. His fingers dig in further as his thumbs brush softly under the hem of my tank top, finding skin, and suddenly it doesn’t tickle as much. Griffin pulls me close, crushing my chest against him as his fingers play along my waist.

“Is this what you want?” he asks softly, his lips near my ear.

“Maybe,” I manage, my eyes closing and chill bumps rushing from my neck to my fingertips with the hot breath he puffs against my skin. I like this feeling of being completely crushed between their weights and held like I’m precious. A little too much.

“I bet you wish it was just me making you feel good,” he whispers just loud enough for me to catch what he’s saying. He draws his lips along my jaw as he pulls away.

Is Griffin looking for validation that I’m attracted to him? That I’ve fantasized about what he would do with me? That I don’t need Wyatt? I pretend to not hear, because there is no way I can answer that. I shouldn’t even be here dancing with them like this. It’s hard to concentrate on the reasons why I shouldn’t when they keep up their pace grinding me between them, their hands wandering across my torso like they’re blind men discovering the sensation of touch.

A breathy sound escapes my lips as my piercing catches the friction of Griffin’s leg. They’re going to do it again, and I don’t want it to stop, even if it’s wrong. I feel Wyatt’s face buried in my hair as Griffin drags his lips softly along my jaw. This isn’t dancing. It’s dry humping vertically, and I’m just along for the ride, caught up in the sensation of hands and legs. It’s probably indecent and not fit to do in public, but that’s partly the appeal. It’s dangerous and bound to get me in trouble and just like my street racing days, it gives me a high I can’t deny. Wyatt uses his hands to angle my hips, sliding me harder against Griffin while he buries himself against my ass.

“Oh God,” I breathe, feeling my body reaching for that peak to free-fall from. Griffin takes my earlobe between his teeth, pulling lightly. I let my face fall into the space between his neck and shoulder, my arms grasping him tightly as waves of pleasure overtake me. Inhaling his spicy scent of cologne, soap, sweat, and even a little bit of tire smoke with a ragged breath, I work to not scream my pleasure. It’s even better this time around.

Adrian R. Hale is a whirlwind of energy and optimism, just as ready to tell you about her books as she is to invite you over for cookies. She is a big dreamer and believes in chasing them down with speed and enthusiasm, much like the characters she writes. You can find her cycling around Austin, TX, running trails, baking gourmet cupcakes, beautifying people for weddings and photo shoots, and traveling all over the country in pursuit of those interests. Once upon a time, Adrian went to college thinking she would be a journalist, but dropped out to go to beauty school. Her first published novel ended up being about a hair and makeup artist. Things have definitely come full circle! She loves hearing from her readers at adrianrhale@gmail.com. 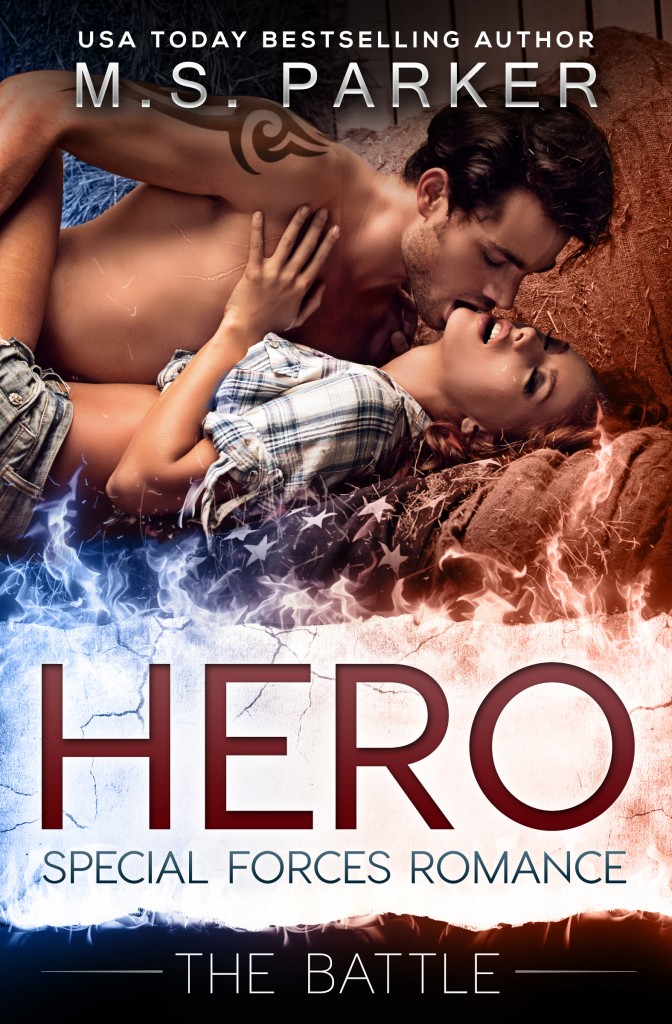 Haze Welch has done something stupid. He's fallen for the girl he's being paid to protect. Worse than that, while he's home for a family emergency, his charge is kidnapped. As he races back to LA, he's determined to do whatever it takes to find Leighton and make sure she's safe again. He can only pray he's not too late.

I'd survived a lot, but I wasn't sure I could survive losing Leighton.

With the woman he loves in more danger than ever, Haze puts everything on the line, including his heart. 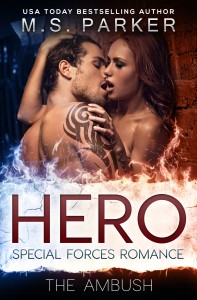 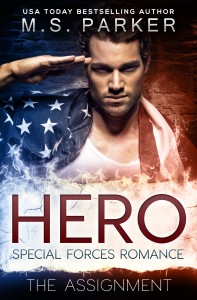 Posted by Unknown at 7:05 AM No comments: 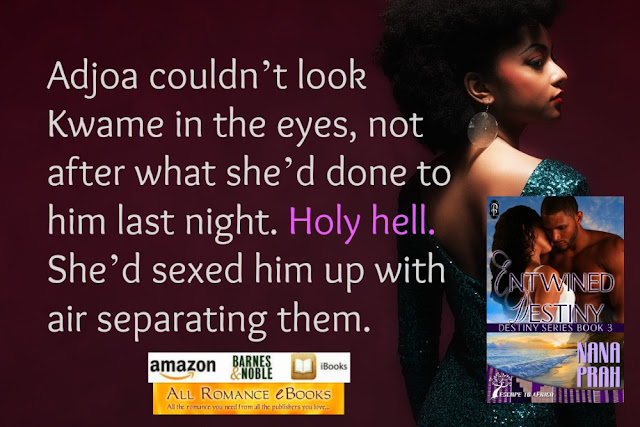 
Adjoa’s polite knuckle knock hadn’t worked, so her fist had to meet the door. He could sleep through anything. “Kwame, it’s me.”

When the door swung open, her eyes met a tall, sexy man with no shirt. The sprinkling of dark curly hair on his well-muscled chest forced her fingers to grip the handle of her bag so she wouldn’t reach out to stroke him.

A bicep flexed as he reached up to rub his eye. She’d always been a sucker for a man with a well-toned body, and this one met all of her muscle criteria.

Her gaze roamed up to the face scowling down at her. Holy crap. It was Kwame’s body she’d been ogling. She pushed past him so he couldn’t see her blush and headed into the kitchen. Grabbing a bottle of water from the fridge, she gulped it down. It didn’t come close to cooling her off. What was going on?

“Why aren’t you dressed? It’s seven.” She glanced down at her watch. “Five after seven to be exact. You should be ready to go.”

Another swig of water at the sound of the sexy rumble of his morning voice didn’t help with the quiver in her stomach. Who was this man and why did he affect her like this? She hadn’t felt this way since she’d had that brief flutter of attraction in college. It had been easy to get over him when he started dating that hussy architect major.

“What were you doing? Computer work?” Please say yes. For years, they’d avoided detailed discussions about the people they dated; it seemed to be a mutual unspoken agreement between them.

Relief flowed out of her in the form of a long exhale, glad he hadn’t been with a woman last night. Not that it should matter. Just because she’d asked him to be her fake man didn’t mean he couldn’t see other women. She didn’t even care. “Not good enough to circumvent you not being awake by now. Get going. Make it quick so both of us aren’t late.”

As he shuffled toward the bathroom, her gaze wandered down to his tight ass. Placing the cold, half-empty water bottle on her warm neck, she snapped her attention away. All of a sudden, her nerdy friend Kwame had morphed into a tempting man.

Click here to visit all the tour stops!
Hosted By: