Cirque act 2 picks up where we left off after Act 1, Sivan has said goodbye not only to Imogene, but to the little bit of himself he had clung to. Secrets of the past are revealed as the clown comes alive in his new home and the truth of his love for Imogene becomes clearer.
Can antoine truly love the clown? Is there any part of Sivan left after he loses Imogene? Come one, come all to the Cirque. The show is starting and it’s sure to make you fall in love, or simply fall and break your heart. 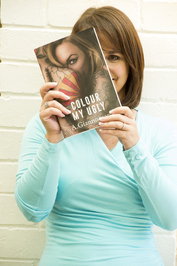 Amazon best selling author Ashleigh Giannoccaro lives In Jozi AKA Johannesburg South Africa with her high school sweetheart also known as her husband and two young daughters. She loves sunshine and psychopaths, her blood type is coffee and she has a pet Meerkat called Porky. She is a full time mom and author, and while she looks like the soccer mom on the surface her books are another story.
As a youngster Ashleigh grew up devouring thrillers and crime fiction, favouring Jeffrey Deaver all the while reading Sweet Valley High to fit in with her friends. When thrillers didn't give her the love and the romance novels didn’t pack the punch she needed Ashleigh discovered the small genre of Dark Romance and her heart was happy. Here’s where the lines of right snd wrong get blurry and the bad guy gets the girl, Ashleigh found the perfect balance of what she looked for in a book. When the time came to write her own stories she knew exactly what they would be, dark and twisted with just enough love. Colour My Ugly was published in October 2014 and since then it’s been a whirlwind of words and adventure that included a trip to the Books Are Bigger In Texas signing in April 2016 and six novels beings let out into the universe to challenge readers and hopefully leave a lasting mark.
Her Colour Series novels are dark romance set within the lives of three crime families. She loves to make you fall in love with the villain, because after all they need love too. Three full length novels span three generations and challenge ideas such as nature vs. nurture. Sometimes Ashleigh conducts psychiatric experiments in between the pages, like that one time she let two sociopaths fall in love. To her the bad guy doesn't need to be redeemed to get the happy ending.
The best selling Red Market Series followed when she teamed up with Mary E. Palmerin to see just how dark a love story could be. The series pushed limits that had never before been pushed and quickly become know as the darkest of the dark reads. The two book series was given best seller status by Amazon, even after ashleigh and Mary both believed it would be banned on release day. She still asks herself “who does that?” about this series quite regularly.
Now writing solo again Ashleigh has turned a poll she took about her readers biggest fears and turned it into a pyscho-erotic thriller about a clown. Cirque will make you forget how much you fear them and hopefully make you fall in love with the painted faces. A dark magical look inside the broken minds of two characters with the circus in their blood, Cirque is something completely different and new for Ashleigh.
When she’s not dreaming up crazy stories or creating villains for you to love, Ashleigh spends her time reading and supporting the Indie author community. Ashleigh has a passion for words and is constantly seeking new ones to read and write.