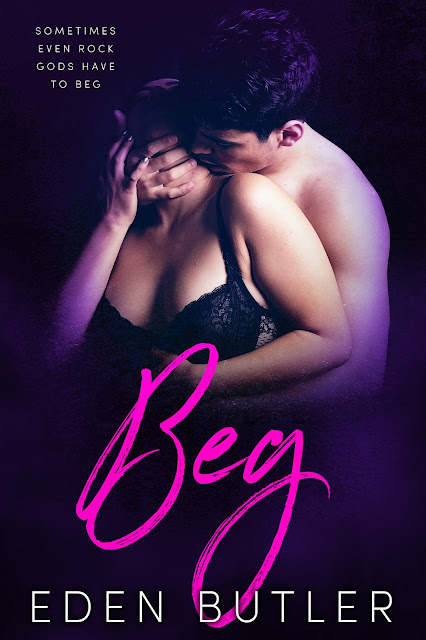 I am a liar. My words were poison and everything I touched got filthy. Except Iris.

She was the best part of who I was. The only bright spark in my dull, gray world.

But denial made me stupid and a cruel insult destroyed everything I hoped to have with the girl of my dreams.

Now I will crawl on my knees and grovel because sometimes, even rock Gods have to beg.

She was starlight, bright and brilliant and out of my fucking reach. There was a hardness to those beautiful features now, a glint of something distant I’d never be able to take from her face.

The endearment bothered her, had Iris jerking a glare my way and I couldn’t decide if I loved or hated it.

“Don’t.” It was all she said, all that seemed able to move beyond the anger and bitterness that had tightened the muscles around her mouth. I did that. I’d caused all that rage, all that venom. I should take it for the medicine it was; gulp it down because I deserved it. But Iris was my past, the sweetest and best part of who I hoped like hell I could be again. More than that, she was my end game, my forever more. I’d do anything to have her back, anything at all to deserve her again.

I took two steps—slow, careful, like she was a landmine easily triggered by the wrong words, the wrong look from me. The closer I came, the straighter her back went and I knew not to push. She hated me and I understood why. I got that I’d done something unforgiveable.

“If saying sorry was enough, it’d be the first thing I’d utter every time I opened my mouth.”

She kept silent, staring straight ahead, watching the nurses shuffle around their reception area, thumbing through files, answering phones. I could only watch her, profile sharp, face tense, but none of that lessened that beautiful lines of her face or the sweet swell of precise features that gave her the look of a statue—something formed with love and care, something far too beautiful for this ugly world.

Blinking brought images straight to my mind of Iris and me, her laughter, her smile and how many times I’d put it there; how often it was my words, my music, my jokes that kept her face lit up and sweet. But that had been a long damn time ago and I hadn’t been the cause of anything remotely similar to those expressions.

“Sorry means nothing,” she started, focus still on the movement of activity around us. “Especially when it comes alone.”

She nodded once and her voice was tight, the inflection shaking with what felt like anger to me. “Words are just words, sounds and syllables that fade to nothing. Actions. Deeds. Those are the things that matter.”

“Tell me what to do,” I said, moving closer than I should have, making Iris step away from me. “Please.”

Iris inhaled, wetting her lips with her tongue before she shot one sharp, furious glare at me. “Forget you know me and for God’s sake, Jamie, leave me the hell alone.”

The click of her boots sounded like slaps against my face as she moved down the hallway, further and further away, and I fought the urge to chase after her. Her hair was longer now, sliding against her back, grazing her waist as she moved. I wanted to tangle all that hair between my fingers. I wanted to know if that honeysuckle scent still hung in her hair.

“Sorry,” I told her, knowing she was too far away to hear me. “You can’t forget the only good you’ve ever known, mami.” I walked forward, scrubbing my face as I watched her. “Forgetting you is that last thing I’ll do.”