Release Blitz - Jan 22 - BURN FOR YOU by GWEN KNIGHT 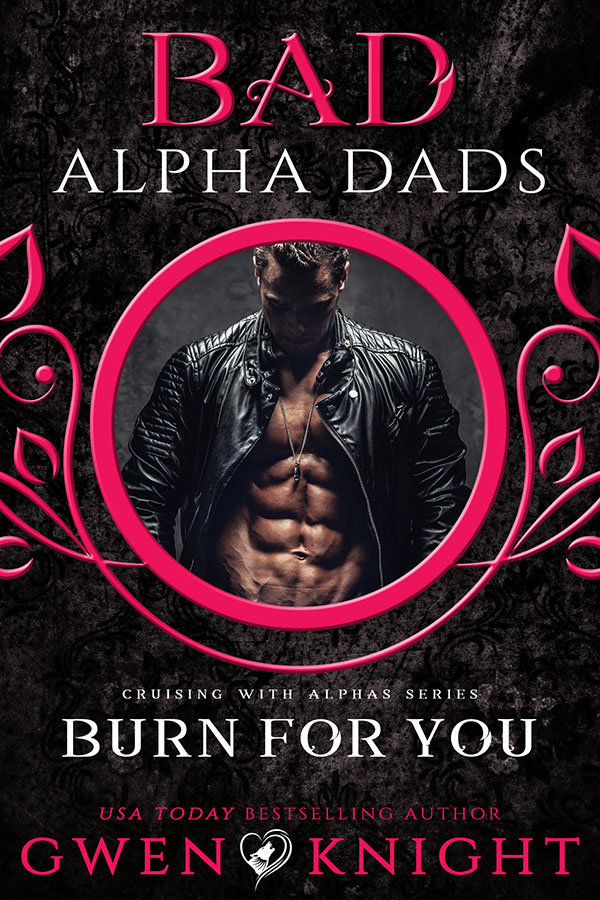 First rule of being a single dad... Don't f*ck up.

Dragon-shifter Keaton Lafay is at the end of his rope. It's hard being a single dad, especially when his daughter is a teenager who can breathe fire. When his clan signs him up for a singles cruise with Meet Your Alpha, Keaton has no choice but to go. The catch? Thanks to a certain daughter's recent expulsion, he isn't sailing alone. Out at sea, surrounded by nothing but water, desperate single females, and his crotchety daughter, what could possibly go wrong?

As a child counselor to a school full of female preteen shifters, Wren Michaels is convinced she's seen it all. But when Jinx Lafay loses control and shifts on campus grounds, she soon realizes she doesn't know anything. Including how easy it is to fall for Jinx's growly father. When she stumbles across Keaton on a singles cruise, it seems like all her dreams are about to come true. Until a strange witch awakens something powerful within Wren--something best left forgotten...

BURN FOR YOU is part of the Bad Alphas Project as well as the first book in Gwen Knight's Cruising with Alphas Series!


Keaton
Purrs4You: Hey handsome. Wanna fuck? I’ve never ridden a dragon before.
I bit back a laugh and stared at the words, astounded by her lack of effort. Seriously? Was this what amounted to dating these days? Just sign up on a website and fire off a few risqué sentences with the hope someone responds? And her username? A dig at her shifter form, most likely. Probably some type of cat—I hadn’t bothered to read her profile.
Purrs4You: Well? You interested, baby? Bet I can set your loins on fire.
And not in a good way, I assumed. Who the hell was this woman? Did she honestly think this sort of message would work? I shook my head, about to close down the conversation when I saw those three little dots scrawling across the screen, indicating an incoming message.
Joy of joys.
Except, instead of more text, a picture popped up on my screen. A picture of… Whoa. I blinked, equally surprised and amused by this turn of events. Definitely a pussy staring back at me. And not the four-legged kind.
Clearly, she expected a response. I imagined her sitting at a desk somewhere, tapping these long nails against the wooden top as she waited for my answer, a predator among prey. Well, dragon trumped kitty any day of the week. And this dragon had zero interest in making her purr.
I typed out a quick message. Simple and succinct.
Keats: Not interested.
Purrs4You: Bet I can change your mind. No one can resist petting my mouse.
Her…what now? I wasn’t entirely up on modern-day slang, but I think I got the gist of that one. I exhaled and tossed my phone down onto my own desk.
My phone dinged again, but I ignored it. Ever since Jasper signed me up on that stupid site, it’d been one message after another. Ding, ding, ding. Nonstop alerts filling up my phone until I wanted to break the damn thing.
God, I hated dating.
The entire process was maddening. The wooing, the flowers, the pretty words, the false promises… Not to mention the most difficult part: meeting someone. People often said the first obstacle was the hardest to overcome. But, seriously? What the hell did these women expect from me?
Back in my day, dating seemed so simple. Find a beautiful dragon-shifter, charm her with hordes of gold and plumes of fire, then settle down, marry, and pop out a few kids. I’d done all of that, only to find myself widowed and alone within twenty years—a shockingly short timespan when dealing with shifters.
Nowadays, it seemed like women wanted so much more. Not to mention my chances of finding another female dragon-shifter were slim to nil. We were a dying breed. The world had given way to the wolves and the lions—the more adaptable breeds. We dragons were caught in the past. We missed our castles and riches, and the days when we could spread our wings and take to the skies. Now we needed a bloody flying permit. Even had to register with the Federal Aviation Administration. Somewhere in my wallet, I literally had a card that read recreational pilot.
I leaned back in my cushioned chair and stared at the matchmaking website in front of me. MeetYourAlpha.com—Where Happily Ever Alphas Are Only A Click Away. Catchy, I suppose. When Jasper first told me about this site, he’d claimed it catered to the paranormal community, though they did allow humans to join if they so desired. How my happily-married second-in-command had heard about this site, I hadn’t a clue. Nor did I intend to ask. Ignorance was bliss.
Jasper had even gone so far as to make me a profile, seeing as he was one of the few who not only understood technology but reveled in it. The marvelous things modern technology can do, he’d said. Truthfully, I’d nearly torn a few scales off his hide when he’d first mentioned this to me. Until I’d spotted the hopeful gleam in my clan members’ eyes. For five years now, I’d been without a mate, and it seemed they were of the unanimous decision that I needed to find someone new who would care for me and my daughter. It didn’t matter to them that I’d already had my chance at true love.
And lost it.

Gwen Knight is a Canadian girl currently living in Jasper, AB. She graduated from the University of Lethbridge with a degree in Archaeology and Geography. Her interests consist of playing in the dirt, designing elaborate snow forts, boating, and archery.