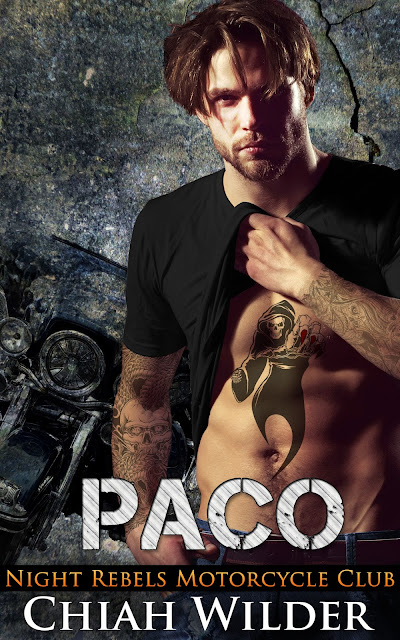 Paco, the rugged VP of the Night Rebels MC, only stopped to get out of the rain and have some chow at the diner. He was headed back to Alina. He never intended on staying, but he saw her sitting alone at the booth next to his. She had on too much makeup and too little clothing for the cold wintry night.

Then she looked at him: her eyes were dark like an endless stretch of midnight sky. In their inky depths, he saw sorrow and pain and threads of fierceness. They drew him in.

He, the man who never looked past one night with a woman, wanted to know about this small woman sitting across from him.

Sensing she was in trouble, he wanted to help her. He knew he should just pay his bill, hop on his Harley, and head home, but he couldn’t. She grounded him, and in that one instant, he knew she’d be his. The urge to possess her consumed him.

Misty Sullivan hated the cold nights when she’d have to haul her ass from truck to truck to make enough to satisfy her boyfriend, Bobby. She used to have another name, but that was a long time ago when she was normal and life was good. She tried not to think about it anymore—it just made her life worse.

The stranger who stared at her didn’t look like a trucker. He was decked out in leather and denim, and he looked at her like she was a person, not a piece of a$$. But life experience told her he was probably just as bad as all the other men who came into her world.

Men couldn’t be trusted. They acted nice to get a woman where they wanted her, and then they turned mean and ugly.

But the stranger’s piercing stare didn’t frighten her, and that surprised her. A good-looking, sexy man like him could have any woman he wanted, so why was he wasting his time with her?

Then events threw them together and Misty had to decide if she should trust the man who was playing havoc with her heart.

Paco knew that the only way Misty could trust him was to face her past and deal with it. Would she let him help her before her past crashed with her present and destroyed her? Could he let her slip away from him?

This is the fifth book in the Night Rebels MC Romance series. This is Paco’s story. It is a standalone. This book contains violence, sexual assault (not graphic), strong language, and steamy/graphic sexual scenes. It describes the life and actions of an outlaw motorcycle club. If any of these issues offend you, please do not read the book. HEA. No cliffhangers! The book is intended for readers over the age of 18. 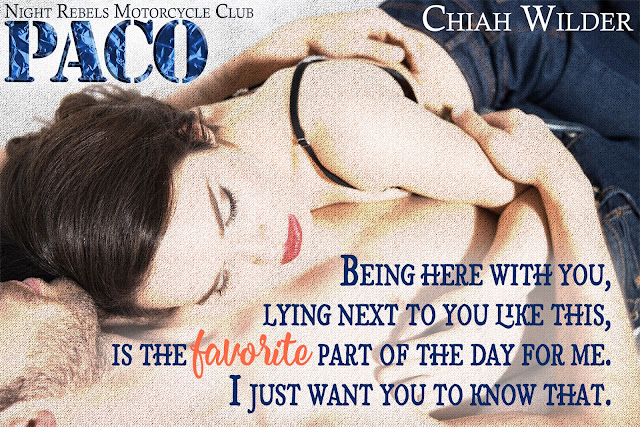 Chiah Wilder writes about rough, sexy men who know how to treat their women. Always a lover of books, she began writing at a young age and continued through college with collections of short stories. Figuring she had to grow up and get a “real” job, her writing was placed on the back burner. Her love of reading has always been center front in her life. Chiah’s love of bad boys both in and out of fiction has inspired her books. She loves an alpha male whose softer side is brought out by a passionate, spirited woman. In fiction there are no rules or boundaries, and fantasies can go as far as the characters want to take them. Steamy, romances with tough, sexy bad boys are her guilty pleasure along with brownies, cheddar cheese, and movie marathons. Get a FREE steamy novella when you join the Chiah Wilder Newsletter. By subscribing, you will get the scoop on new releases, previews, free short stories, and a whole lot of other exciting goodies: http://eepurl.com/bACCL1