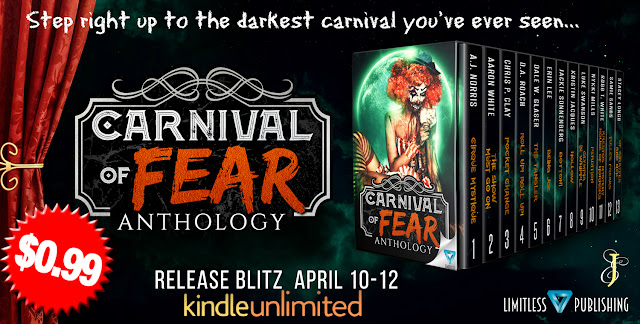 Ladies and gentlemen! Boys and girls!

Step right up to the darkest carnival you’ve ever seen.

Do you like puppets? Well, we have a marvelous one. This poor little thing was left all alone to die, only to wake up with a taste for revenge.

If smiling, red-nosed clowns bore you, you’ve come to the right place. Just follow the bloody path of mutilated clowns, and it will lead you to a room filled with gruesome revelations.

But that’s not all.

Ready for a mind-bending experience? Wonderful! Our contortionist won’t just showcase her extreme flexibility, she’ll also shock you with her insatiable appetite. Want to know her secret?

So grab your friends and join us as we create the most bone-chilling atmosphere.

Because we’re coming to your town…

…and we’re bringing the Carnival of Fear. 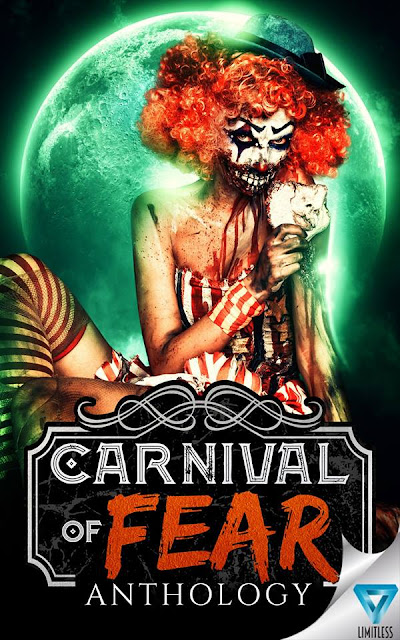 DA Roach
D.A. Roach is a YA/NA writer who enjoys the challenge of crafting stories in different genres. When she’s not writing, she enjoys going to rock concerts, hockey games, horror movies and gardening.

Erin Lee
ERIN LEE is a freelance writer and therapist living with her family in southern New Hampshire. She is the author of Crazy Like Me, a novel published in 2015 by Savant Books and Publications, LLC. She is also author of Wave to Papa, 2015, Nine Lives, 2016, and Alters, 2016 with Limitless Publishing. She authored Losing Faith with Black Rose Writing. Other titles include Host, Merge, Her Name Was Sam, Take Me As I Am, 99 Bottles, The Morning After and award-winning When I’m Dead. In her free time, she works on her upcoming releases, Just Things, a novel built on the life of Jimmie Putnam as seen here in her story, “Jimmie’s Freezers,” (The trouble with) Butterfly Kisses, From Russia, With Love, and Between the Cushions: A poetry collection.

Jackie Sonnenberg
Jackie Sonnenberg is an actor and writer living in Orlando, Florida, where she brings scares to life on a daily basis. She is an actor at a year-round zombie-themed attraction, also writing its backstory: www.zombieoutbreak.co/blog
She is working on more books and stories in the dark side, including her own twist on Nursery Rhymes.

Nykki Mills
Nykki was born and raised (mostly) in a cow town in Tulare county, CA. She moved with her mother to UT at 16. This is where she met her future husband and father to their three adorable children. They now live in the beautiful state of MT, exploring the wilderness one weekend at a time.

Growing up her nose was always in a book, having read nearly every VC. Andrews book by the age of twelve. It wasn’t until 2011 that she discovered her passion for writing. Her debut novel SACRIFICED is available now on Amazon! It is a YA paranormal with horror elements. She also writes fantasy, sometimes with a little sci-fi elements spun through.

Stacey Longo
Stacey Longo is an award-winning author and editor living in Hebron, Connecticut. Most recently, her YA mystery, My Sister the Zombie, was released in March 2018. She is also

the author of the Pushcart-nominated Ordinary Boy, a dark fiction novel, and Secret Things, a short story collection, among other titles. She is a former humor columnist for the Block Island Times, and writes a weekly humor blog at www.staceylongo.com.

Luke Swanson
Luke Swanson lives in Oklahoma City, soaking up as much story as he can. He attended Oklahoma Christian University, studying writing and history. His mystery novel, The Ten, is available from Limitless Publishing, and his short stories “The Six-Foot Ladder” and “Sacrifice” have been featured in previous “13” anthologies.

Chris P. Clay
As a boy, Chris P. Clay was timid, nervous and easily spooked. As an adult, he considers himself to be reserved and cautious. The easily spooked has morphed into a fascination with all things eerie and macabre. He is fascinated with the supernatural and exploring the scary side of childhood fairy tales, old toys, circuses and carnivals. Some of his favorite dark visionaries are Stephen King, Neil Gaiman, Guillermo del Toro and Tim Burton. When not writing, he reads, watches movies, walks or bikes, cooks and makes art.

AJ Norris
A.J. Norris is a romantic suspense and dark paranormal romance author. She enjoys being able to get inside someone else's head, even a fictional one, and see what they see. Watching how her characters deal with difficult situations or squirm with the uncomfortable ones makes the hard work of writing all worth it.

Aaron White
Aaron White started drawing monsters when he was four years old, which proved to be a catalyst for his active imagination. Throughout grade and middle school he drew various ghoulish creatures while pouring through books by author such as John Bellairs, C. S. Lewis, and even Stephen King. Aaron went on to major in Illustration at Massachusetts College of Art, but still dabbled with creative writing here and there. Eventually he decided to focus his imagination
on writing, and has since completed several short stories in the horror and sci-fi genres. He’s also working on a full-length fantasy novel for young adults. Aaron currently resides in central Massachusetts.

Dale W. Glaser
DALE W. GLASER is a collector, re-teller and occasional inventor of fantasy tales. He requires air, food, water and stories in order to survive, not necessarily in that order. His lifelong love of written words has manifested as a devotion to the English language almost exclusively, which is probably just as well because if he were to master any of the dead tongues that conceal ancient mysteries and invoke malevolent forces, we'd all be in trouble. His short stories have been published in magazines such as Cheapjack Pulp, Occult Detective Quarterly, and Trysts of Fate, as well as anthologies such as Final Masquerade, Eldritch Embraces and Pirates Vs. Monsters. He currently lives in Virginia with his wife and three children. He can be found online at https://dalewglaser.wordpress.com. 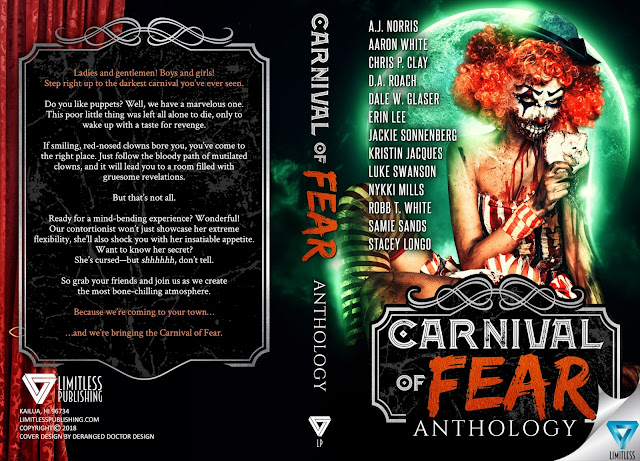