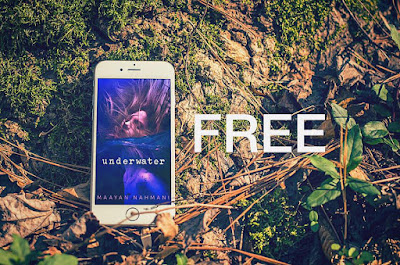 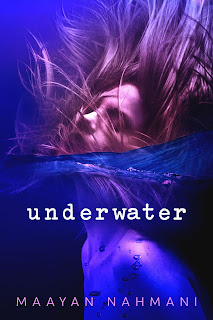 IN AN INSTANT, my world turned upside down
Because of one incident, my life will never be the same
Every day I struggled to breathe
Every day I went through the motions
I felt too much
I was numb
I was drowning
I was lost inside the black
So they made me go there
I was already there, watching from the dark
And then I met him
And then I saw her
He scared me to death
She took my breath away
He was darkness
She was my light
They whispered he can't be touched
She was the only one I could touch
I couldn't be with him, they needed me
I fucking needed her
So I told him I would be his friend
I told her I would be her friend. For now.
But I couldn't resist him for long
She finally realized that she'll always be mine
We were a hot mess
We were the perfect kind of mess
Then reality dawned on me
Then my demons broke loose
I was underwater, trying to break through to the surface
I reached out my hand, trying to pull her to shore
Could he really help me?
Would she accept me, scars and all?
This was US
THIS WAS OUR STORY

Author's Note:
"This book is based on true events and contains sensitive subjects that may be a trigger to some readers, such as violence, abuse and post-traumatic stress disorder. It also contains a parent with cancer. It is recommended for ages 18 and up."

"This was a FANTASTIC debut from Maayan. I never would've thought this was her first book. Underwater was so emotionally packed and beautifully written. The love between the two characters was so strong and passionate it was the once in a lifetime soulmate kind of love." ~ Shelby (Book Lovers Have More Fun)


"This book is an emotional roller coaster of a ride. The fear of the unknown, The what ifs, The love and touch of a loved one can change your life. This story is so beautiful and real. One of the most beautiful and heartfelt story I have read." ~ Hooked On Books


"I cannot stress enough how much I recommend this book, it teaches you that there is always hope, even in the darkest of corners..." ~ Roksana

When he turned on the lights, I sucked in a breath. I was here, and there was no turning back. I gave myself a moment to focus on the apartment. Floor to ceiling windows consumed the entire back wall. The living area was an open concept, providing a perfect view of the whole space. Dorian’s apartment was nothing I had expected. A Victorian chandelier with a modern twist hung from the ceiling over a rustic dining room table. And even though
I looked back at him and grinned. I found myself loving playful Dorian. “Why thank you.”
We took the stairs two floors up until we reached a wood door. After unlocking it, he waited for me to go in before him. As I passed the threshold, he said in an awful British accent, “Welcome to my humble abode.”
Shut up… Don’t think about showers.
He took my hand and led me in the direction of his home. God, his home. The place where he lived. I was going to see where he slept, ate, and took showers.
“We should go up,” he said. “It’s getting cold.”
He left me breathless.
Stormy clouds drifted across the sky, hiding the moon and darkening the neighborhood. Dorian stood at the base of a street lamp where it illuminated his features, softening the rugged angles of his face. He was attractive in a rough-around-the-edges kind of way, but now – as I let myself really look at him – I thought he was the most beautiful thing I’d ever seen.
I pulled my car next to Dorian’s and turned off the engine. I couldn’t believe I’d actually come here. I was scared shitless to let someone in, especially now when all my attention needed to focus on one thing: my dad. Shaking my thoughts loose, I grabbed my purse, exited the car, and made my way over to where Dorian was waiting for me.the space was open, it had a cozy feel. The warm tones of dark blues and light creams contrasted together beautifully to make the room feel inviting.
And beautiful.
“So, what do you think?” he asked hesitantly.
I eyed him as he looked everywhere but at me.
“I really like it.” Then I added, “I like it so much I’m afraid I might never leave.”
His eyes landed on mine in a flash and a smile spread across his full lips. “I’d love that,” he whispered.
He took a step forward and I took a step back. I knew that if he caught me, it would be the end of our friendship. I would cave. I would fall into his strong arms and never let go. I wasn’t ready for him.
He approached me, his pace steady and his steps sure. His eyes were fixed on mine, making it hard for me to breathe.
When I felt my back hit the wall behind me, I knew there was nowhere for me to go. I drew in a sharp breath.
Game over.
Waves of heat washed over me when he placed his hands on the wall beside my head. My tumultuous heart threatened to break out of my chest.
“Did you mean that?” he asked, his deep voice in my ear, rattling my thoughts.
My eyes fluttered closed. “M-mean what?”
“The song. Did you really mean that?”
His finger touched my chin and lifted my head. “Open your eyes.”
I shook my head. I wouldn’t be able to control what he would see reflected in them. And I had a feeling my eyes would tell him everything my mouth was afraid to say out loud.
That I was afraid.
That the world kept beating me down and there was nothing I could do to stop it.
That I didn’t know how to help my family.
That I wanted him. Wanted to be with him.
“Open your eyes, sweetheart.”
I gritted my teeth, refusing to give in.


Heart beats and erratic breaths were the only sounds in the room. Then I heard him mumble, “Fuck it,” and without warning, Dorian’s lips crashed against mine. 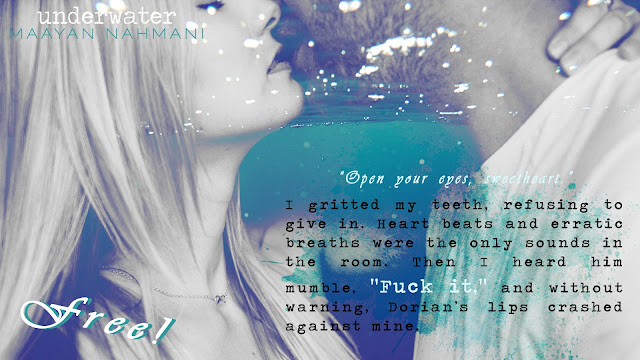 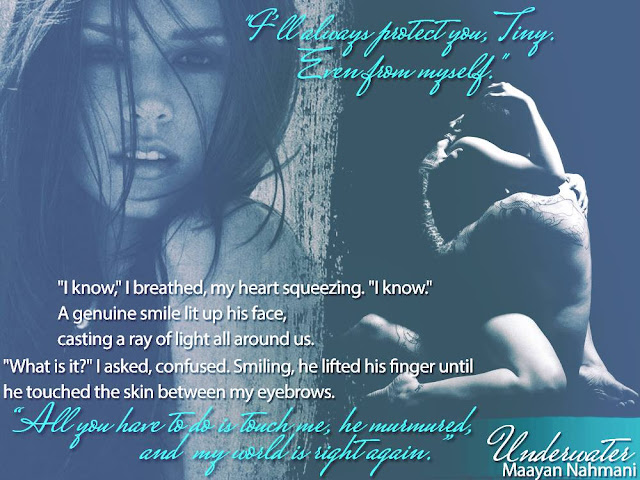 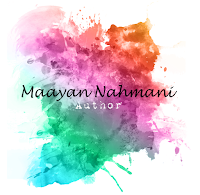 I am twenty-nine years old and I live in a small town in Israel.
My family and I were going through some difficult times not too long ago and one day I was confiding in my best-friend about everything. I didn't know how to deal with it all. Then she suggested I should write a book about it. I looked at her as if she had grown another head and dismissed the idea on the spot. But the seed had been planted, and day after day, little by little, without realizing it - I started writing.

That’s how Underwater was born.

I found writing to be cathartic, healing. Something that helped my mind unwind and put things in perspective. I discovered a magical world where I traveled between imagination and reality. Writing became my home and I never wanted to leave.

I love to read, write, listen to music, edit videos, and play the guitar. I am always looking for the next creative thing. I also like a good movie and a glass of wine. 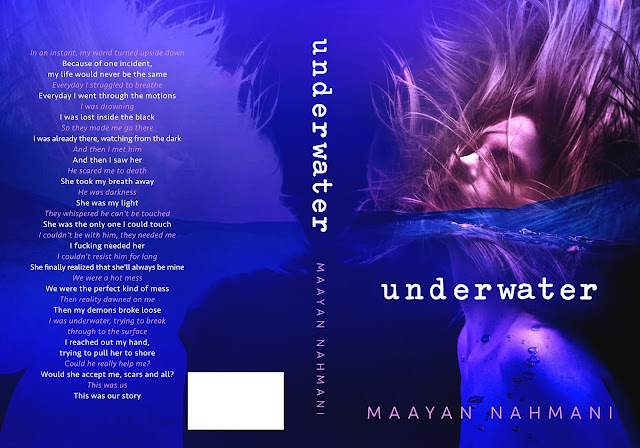