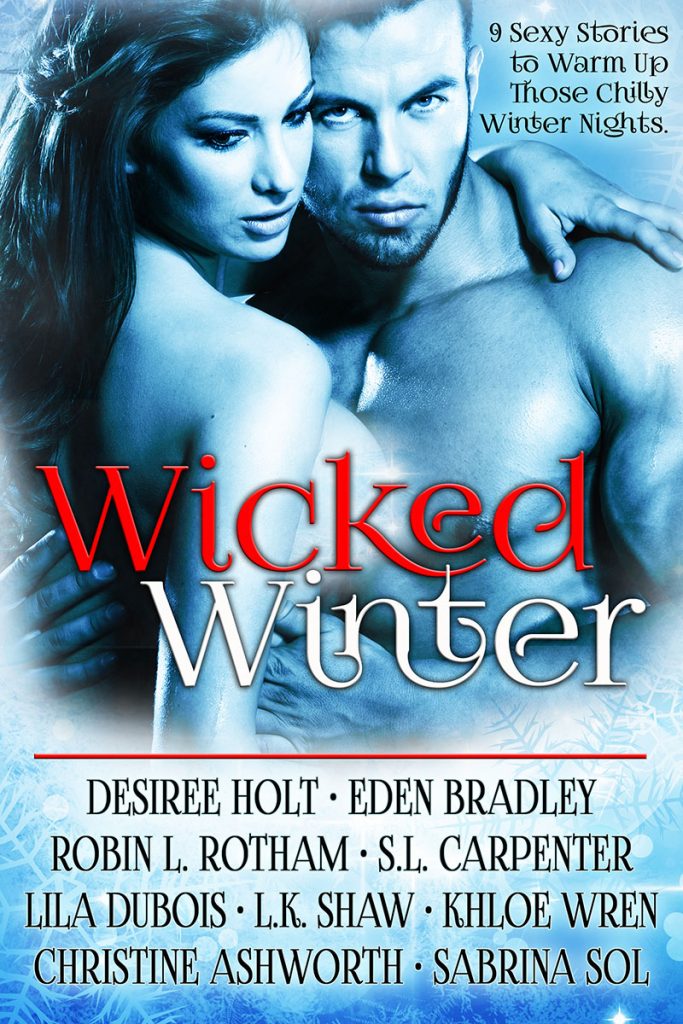 Amazon US I Amazon UK I iBooks I Nook I Kobo
It’s a very Wicked Winter in this Box Set from 9 of the hottest authors in erotic romance! Warm up a cold winter night with these sizzling and emotional tales of love and desire.
Included are:
TIED UP FOR CHRISTMAS By Desiree Holt
THE DOMINANT WISH By Robin L. Rotham
WINTER SOLSTICE BY Eden Bradley
REMEMBER WHEN By SL Carpenter
UNDONE TOY By Lila Dubois
A SECRET CHRISTMAS By LK Shaw
CLAIMING TINY: A Charon MC Novella By Khloe Wren
RIO: Christmas In Paradise By Sabrina Sol
SNOWBOUND AT CHRISTMAS By Christine Ashworth

TIED UP FOR CHRISTMAS by Desiree Holt
Dealing with a messy and humiliating breakup with her Dom, Bree Donovan welcomed the invitation to leave Chicago for a meeting in Texas. An impulsive attendance at a private BDSM gathering wiped all other thoughts from her mind the moment Rafe Morales claimed her as his for the evening…and maybe beyond.
THE DOMINANT WISH by Robin L. Rotham
Once upon a time, Grace Kendrick loved a dominant man. But when Jared McLain asked for more than she was ready to give, she ran away...and paid dearly for thirty years. Now a birthday wish has landed her in the past and back in Jared's bed, and this time there's nothing she won't do for him.

Fortunately, fairy godmothers usually have contingency plans...
WINTER SOLSTICE by Eden Bradley
Do soul mates truly exist? A chance reading with a psychic on Winter Solstice eve has Destiny Walker wondering. When she runs into the gorgeous Reece Kellan, their sizzling connection goes deeper than mind and body—but is it really fate, or simply the most intense sensual experience either of them has ever had?
REMEMBER WHEN by SL Carpenter
Sometimes memories of the past hold lessons for the future. Bride-to-be Pam learns hers as she spends some down time with her Grandma—a woman who sure knows how to tell a spicy, funny tale. Lust, laughter and love...Pam will hear reminiscences of all three. And understand why the most important of all is love.
UNDONE TOY by Lila Dubois
Kiara is happy to model for a winter wonderland BDSM photoshoot, until she learns that the man who will be topping her is the only man she's ever called Master. Ice is cold, but the scenes they perform are scorching, and in the end she'll have to decide if she can overcome her fear of the past, and risk her heart for a chance at love.
CLAIMING TINY: A Charon MC Novella by Khloe Wren
Badass biker Ryan ‘Tiny’ Nelson has no plans to settle down. But when the feisty Mercedes ‘Missy’ Soto shows up at the Charon MC clubhouse, it only takes one taste before they’re both hooked. When Missy’s past catches up with her and she goes on the run, can Tiny find the woman he’s fallen for in time to give her a Christmas to remember, or is she lost to him forever?
A SECRET CHRISTMAS by LK Shaw
Four couples all want something different for Christmas this year. Penny and Marcus want a baby, Connor and Bridget need to feed their sadist and masochist sides, Miles want to marry Josie, and Phebe is ready to fully submit to Donovan. With sex so hot it'll melt the winter snow, A Secret Christmas will have you begging for more.
RIO: Christmas in Paradise by Sabrina Sol
When workaholic CFO Chase Simon is forced to take a tropical Christmas vacation, he sure as hell doesn't expect to enjoy it. But when he finds out that he'll be spending the next seven days with Rio, a sexy celebrity dancer from his past, his doubts begin to fade.

SNOWBOUND AT CHRISTMAS by Christine Ashworth
Trapped with her boss in a remote cabin during a snowstorm, their pent-up passions explode into the hottest sex Kitty has ever had...but Logan has decreed once she leaves the cabin, their professional and personal relationship ends. Now, all Kitty wants for Christmas is Logan’s heart. To get it, she’ll have to do battle with the ghost of his Christmas past.

After a few years living in the big city, she missed the fresh air and space of country living so returned to rural South Australia. Khloe currently lives in the Murraylands with her incredibly patient husband, two strong willed young daughters, an energetic dog and two curious cats.

Khloe started writing in 2012, and now has over twenty published romantic suspense books under her belt.

While Khloe doesn’t ride a bike herself, yet, she loves riding pillion behind her husband on the rare occasion they get to go out without their daughters.
Website I Facebook I Twitter I Instagram I Street Team I Newsletter I Amazon
LK Shaw is a physical therapist assistant by day and writer/social media addict by night. She resides in South Carolina with her high maintenance beagle mix dog, Miss P, who should probably just have her own Instagram account. An avid reader since childhood, she became hooked on historical romance novels in high school. She now reads, and loves, all romance sub-genres, with erotic romance and romantic suspense being her favorite. LK enjoys traveling and chocolate. Her books feature hot alpha heroes and the strong women they love. Her books combine romantic suspense and BDSM.
Author Page I Author Profile I Twitter I Instagram I Amazon I Bookbub I Website I Newsletter
Sabrina Sol is the chica who loves love. She writes steamy romance stories featuring smart and sexy Latina heroines in search of their Happily Ever Afters. Sabrina lives in sunny Southern California with her husband, three kids, two Beagles and one very lazy Bulldog. She is also part of a larger, extended Mexican family whose members are definitely not the source of inspiration for some of her characters. At least, that’s what she’s been telling them. Sabrina loves to connect with readers.
Twitter I Instagram I Facebook I Website I Amazon
USA Today Bestselling Author Christine Ashworth has been writing since 2002, and has no plans to stop. Still 17 at heart, she is a romantic, and hopes to one day match her father’s record of over 350 published fiction books. Follow Christine here:
Website I Facebook I Twitter
Posted by Unknown at 5:00 AM