Striving for Normal by B.L. Mooney

Striving for Normal by BL Mooney 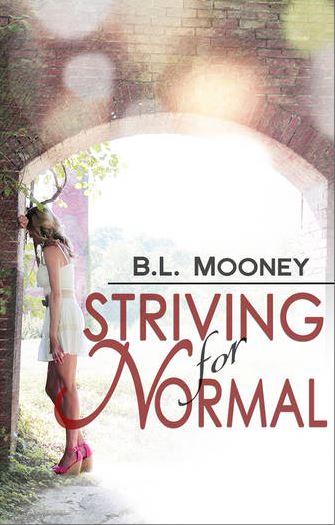 I loved Striving For Normal! This book sucked me right in, and I didn't want to put it down until I was finished! Lets start with Drew Clayborn- oh my! Drew I felt for immediately. Drew carries around a lot of guilt. She is trying to come to terms with things that she did in her past that she's not proud of. Through her therapy sessions we learn more, and more what those things are. Drew broke my heart! I just wanted to hug her! She felt she didn't deserve to be loved or be happy ever again. Coming from a horrible relationship Drew doesn't trust anyone.
Carl Williamson- Mr.Hot rich man who has everything a girl could want. Drew is drawn to him. We soon find out Carl is fighting a loss of his own. He is a lot like her ex and that scared me. Dennis Brooks- He is super sweet, he seems like the obvious choice, but Drew still is uncertain. She can talk to Dennis, and he makes her smile. I was shouting for her to pick Dennis the entire time! As we get deeper into the story we see Drew struggling to choose! She still feels she isn't worthy to love again. We also get flashbacks as to where all a lot of her pain is coming from. Just when I thought I had it figured out the ex comes back into the picture! I don't want to give too much away so I'll let you see who she ends up with. I had tears one minute, and was yelling at my kindle the next! You will go through a roller coaster of emotions! I give Striving for Normal 5 stars! I loved it! It kept me up wanting to read it so fast to see what would happen next. Just when you think you have it all figured out B.L. Mooney gives you more! Loved the characters! What a beautiful story about putting yourself back together after so much pain. Loved it! <3 Carrie


“Yeah, next time.” He had just finished fastening his jeans. “And next time, wear the dress I told you to wear with the buttons on the front so I can get to your tits.” As he grabbed my hand and started pulling me away, I looked back at the penguin that started this all and decided to leave it in the dirt. It looked as dirty as I felt. I didn’t need a souvenir to remember that day. It was one I would never forget.
Posted by Unknown at 4:37 PM No comments: