Love, Laughter, & Happily Ever Afters
Eight Fun, Romantic Novels by Eight Bestselling Authors
Just in time for summer! An all-star collaboration by some of today’s most popular bestselling romance authors. From the funny and sweet to the steamy and heartfelt, this collection has eight full-length FUN, romantic love stories hand-picked to bring a smile to your face while you’re lounging out in the sun this summer. This limited edition boxed set will only be available until July so get yours today! Total length is 1,800 pages and at just **$0.99** for eight novels, that’s a $27 savings!

ON ANY GIVEN SUNDAE by USA Today Bestselling Author Marilyn Brant A shy dessert cookbook writer reconnects with her longtime crush--an ex-football star turned businessman--when they run an ice cream shop together. FINDING THE RIGHT GIRL by NY Times & USA Today Bestselling Author Violet Duke Tessa Daniels has no idea why she told her friend’s brother she was a fling expert. She's never been flung before and she sure as heck doesn't know where or how to begin flinging a guy like Brian Sullivan. The man’s got as many demons and skeletons in the closet as she does; and worse, he’s got her thinking of the one thing she stopped letting herself hope for years ago. A happily-ever-after. SWEET TO YOU by iTunes & Barnes and Noble Bestselling Author Jessie Evans Where there’s smoke, there’s fire… When s’mores and whiskey shots lead to skinny-dipping at a singles’ camping retreat, Maddie Whitehouse knows she won't be able to resist another steamy encounter with the sexy firefighter her childhood friend, Jamison, has become...even if he is off limits. UNAFRAID by USA Today Bestselling Author Melody Grace Brittany Ray's learned the hard way that some dreams aren't meant for girls like her. Handsome, charming Hunter Covington is one of those dreams. Years ago, they shared one life-changing night together, but Brit walked away before he could break her heart. Now Hunter's back in Beachwood Bay, their reckless passion can't be ignored. But will dark secrets tear apart their new beginning? LOVE LOVE by Amazon Bestselling Author Beth Michele Gabby is running from a past that she can’t seem to escape. But what happens when she discovers something unexpected along the way that may just lead her from the shadows? Maybe something magical. What happens when love finds her but her heart has gone into hiding? GETTING OUT OF HAND, the brand new novel by Samhain Bestselling Author Erin Nicholas Genius scientist Mason Riley can cure world hunger, impress the media and piss off the Vice President of the United States all before breakfast. But he’s not sure he can get through his high school class reunion. Then he meets the new girl in town. Adrianne Scott loves the sleepy little town of Sapphire Falls—the perfect place to open her candy shop and live a quiet, drama-free life. Until Mason Riley bids four hundred dollars just to dance with her. TEMPTING LOVE by Amazon Bestselling Author Melanie Shawn Haley Sloan knew exactly what she wanted out of life. With her designer lingerie business booming, her career was moving forward, but her heart stayed in the same place it had for four years…hopelessly in love with the single father across the street. Former wild boy turned responsible adoring father Eddie Thomas selflessly sacrificed his wants and needs for that of his little girl, meaning he sacrificed his want and need for Haley. Will Haley finally be able to break through to the heart of the man who has had hers prisoner for years? NOT OVER YOU by NY Times & USA Today Bestselling Author Marquita Valentine Summer Holland is set on one thing--convincing her childhood sweetheart *and* local preacher's son, Gabriel Edwards, to marry her so she can get back the daughter she gave up for adoption. She’s always been able to count on him rescuing her when she needed it most, but this time is different… there’s a new woman in Gabriel’s life. Only, Summer's not going to let that get in her way.

Connect with the Authors

Posted by Unknown at 8:07 AM No comments:

Redeeming You (Before You #2) by Lisa Cardiff Cover Reveal

After walking away from a controlling relationship, Taylor Reed is broke, homeless and unemployed. When her brother, Alec, the drummer for Chasing Ruin offers her a job working for Chasing Ruin for the final thirty days of the tour, Taylor jumps at the chance.

Unfortunately, that job entails keeping Cam Donovan, Chasing Ruin’s lead guitarist, out of trouble for the remainder of the tour, but Taylor isn’t worried. She’s smart enough to keep her distance and there’s no way she’ll let herself be another notch on his bedpost.

Cam Donovan’s life hasn’t been the same since he ruined his chances with Bre, his childhood sweetheart. With regrets eating at his soul, he fills his life with meaningless one-night stands blurred by alcohol and drugs until Chasing Ruin threatens to kick him out of the band.

When Taylor joins Chasing Ruin on tour, he’ll do anything to avoid the mutual attraction simmering between them. He can’t afford another the distraction. But as the lines blur, and the days turn into weeks, Cam and Taylor realize their feelings for each other might be too hard to ignore.

After spending years practicing law and running a real estate development company with her husband, Lisa decided to pursue her dream of becoming a writer and she must confess that inventing characters is so much more fun than writing contracts and legal briefs. A native of Colorado, she lives with her husband and three children in Denver. When she isn’t managing the chaos of raising three children and owning her own business, she can be found reading or writing a book.

Follow You Down by K.B. Webb
Dani Hartley is running from heartbreak and shame. She needs a new beginning, a fresh start with no commitments or attachments. What she definitely doesn't need is a gorgeous cocky sex god trying to fly in and play Superman.Lucas Wade knows a thing or two about running. He has secrets in his past so dark they've turned part of his heart black. He only truly cares about two people in the world, his mother and little brother Logan. With the past that he has, the last thing he wants or needs is a mouthy red head busting into his life trying to get to know him and his secrets. What started as one night of passion quickly turns into a mess of feelings and desires that neither Dani nor Lucas can deny. But, what happens when two lost souls try to save each other all while working to keep their own secrets hidden.How far down would you follow someone to save them from them self? And how do you save them if they don't want to be rescued? 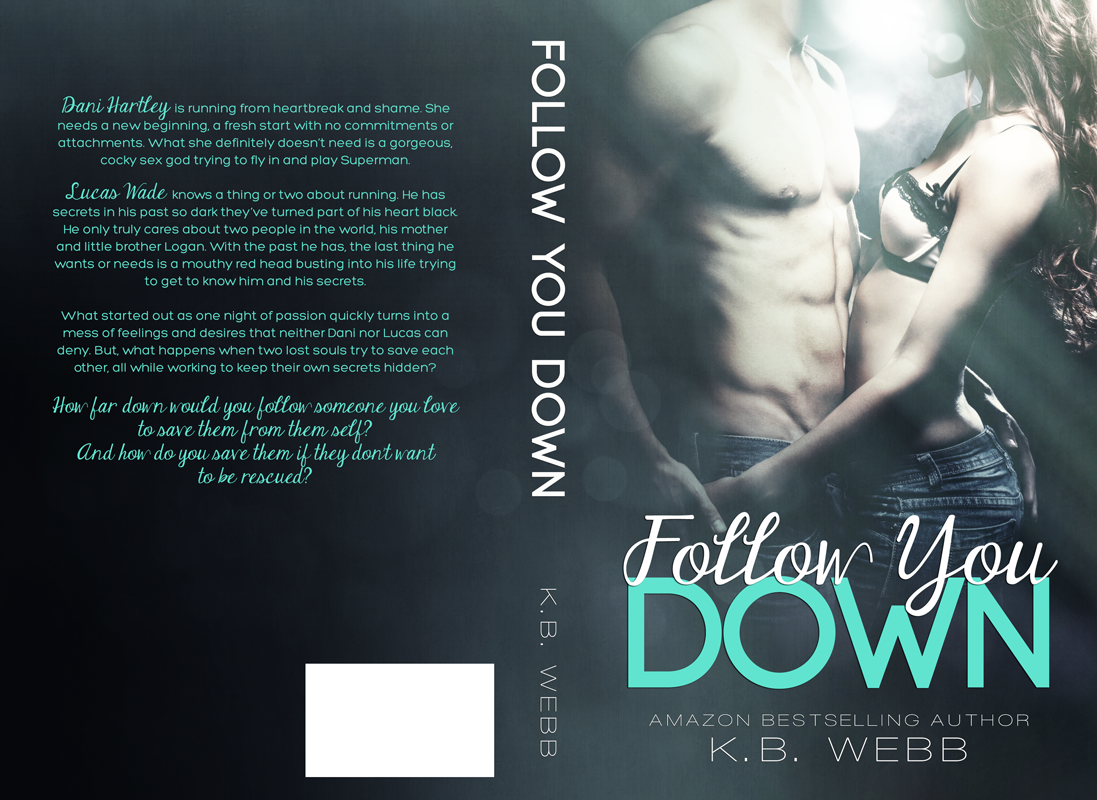