What If by Bayli Lane Promo Blitz 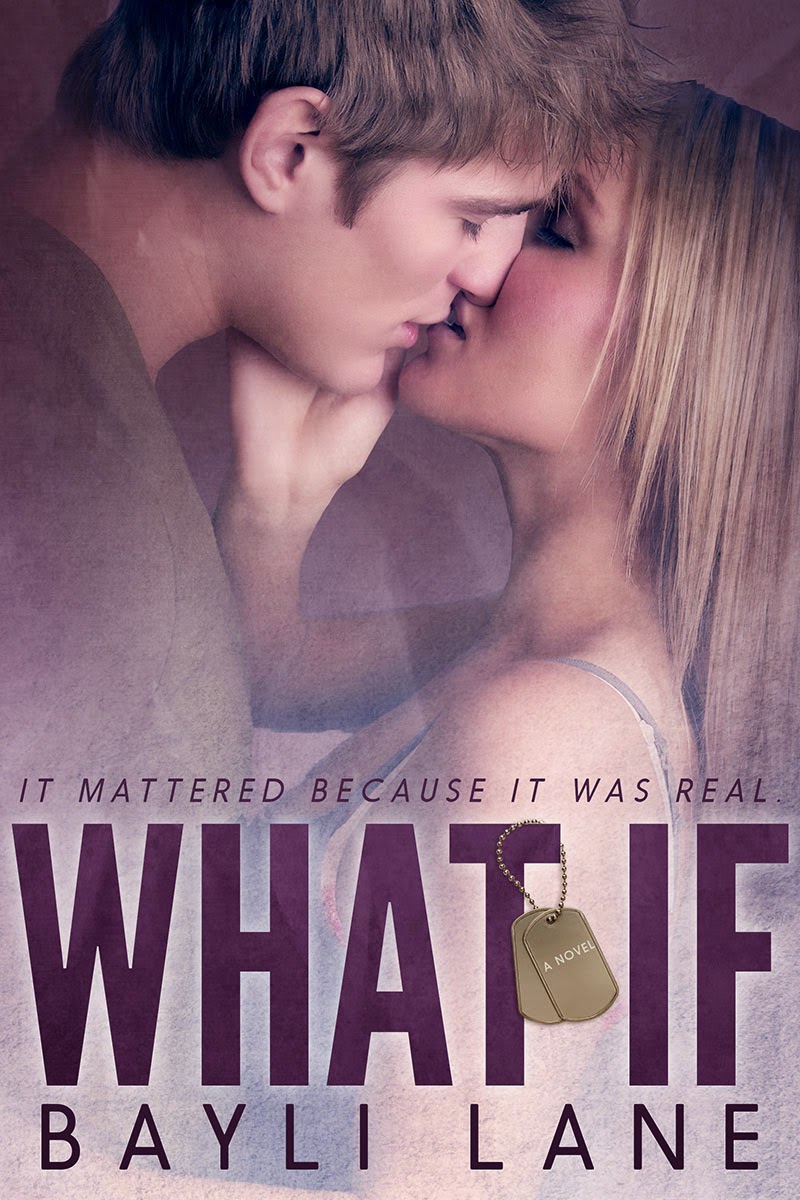 Synopsis
For some people falling in love was a happy, glowing experience. For Briar Kelly and Arrow Donovan it was more like getting hit by a freight train.

Caring for one another was never an easy feat. They constantly fought to hold their feelings inside, not wanting to jeopardize their friendship. Then, Arrow left for the Marines, and everything changed. Briar was shattered. Arrow was hurt.

While Briar told herself she’d never let another man affect her in such a way, Arrow still remained in the forefront of her mind. For Arrow, his memories of Briar kept him alive in both of his near death experiences. When Arrow’s demons threatened to drag him under, Briar was there, pulling him from the darkness.

"What ifs" keep piling up while resentment and redemption battles continue; will Briar and Arrow be able to find their happily ever after, or will this be one war that Arrow can't win? 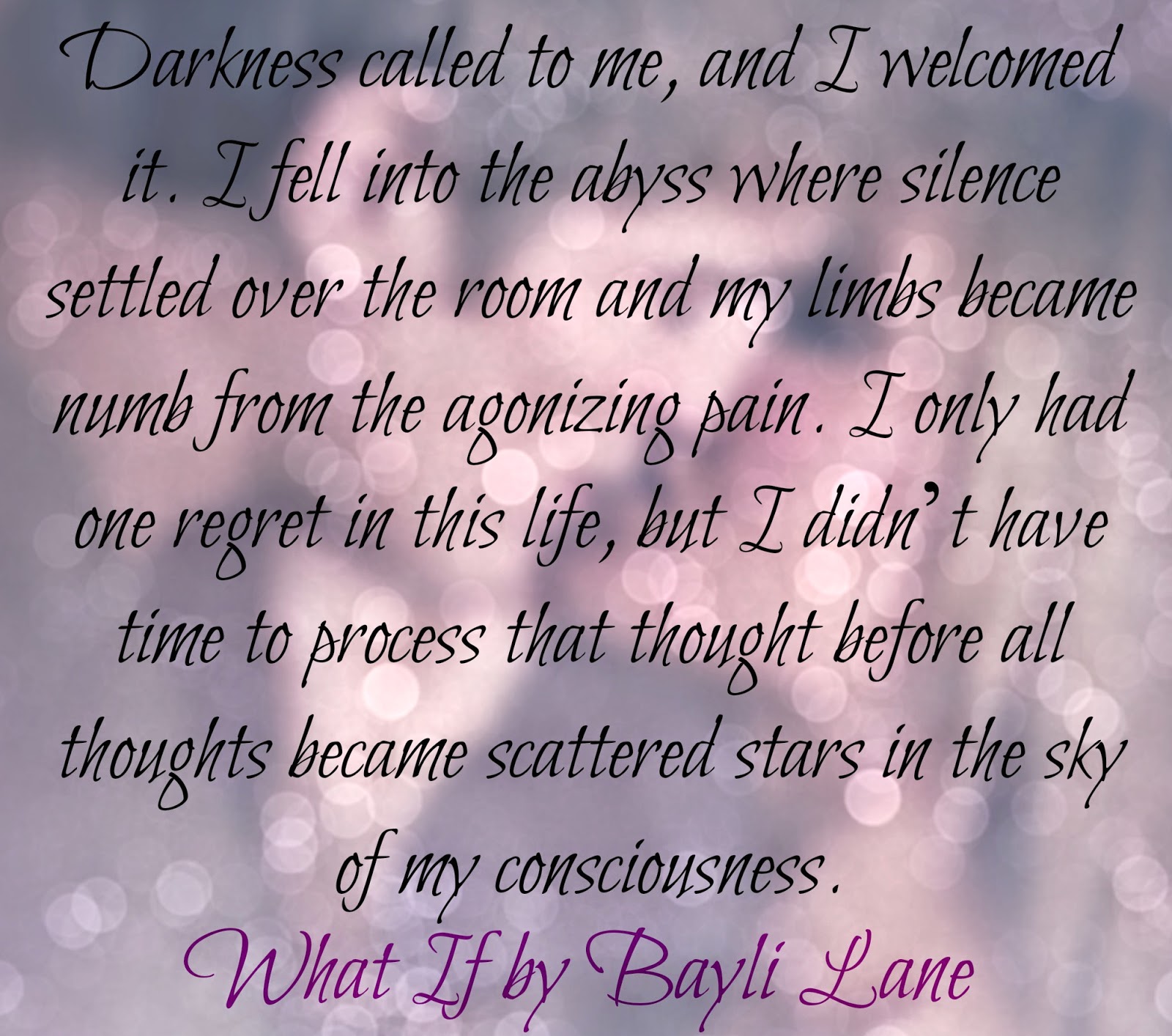 Excerpt
“Wait, don’t forget the light,” she spoke quickly.
I nearly laughed. “Are you out of your mind, woman?” I pushed her legs apart and settled myself between them so she couldn’t close them tightly back together. I splayed my hands across her stomach.
“I like the light off,” her eyebrows drew together.
“Too damn bad.” I moved the tip of my pointer finger in small circles around her concave navel. “Do you know how many times I’ve played this scenario in my head? Try every day since I was fifteen years old. No way am I going to miss out on the way your body writhes underneath mine or the look on your face when I make you come.” Her hips tipped upward with my words. 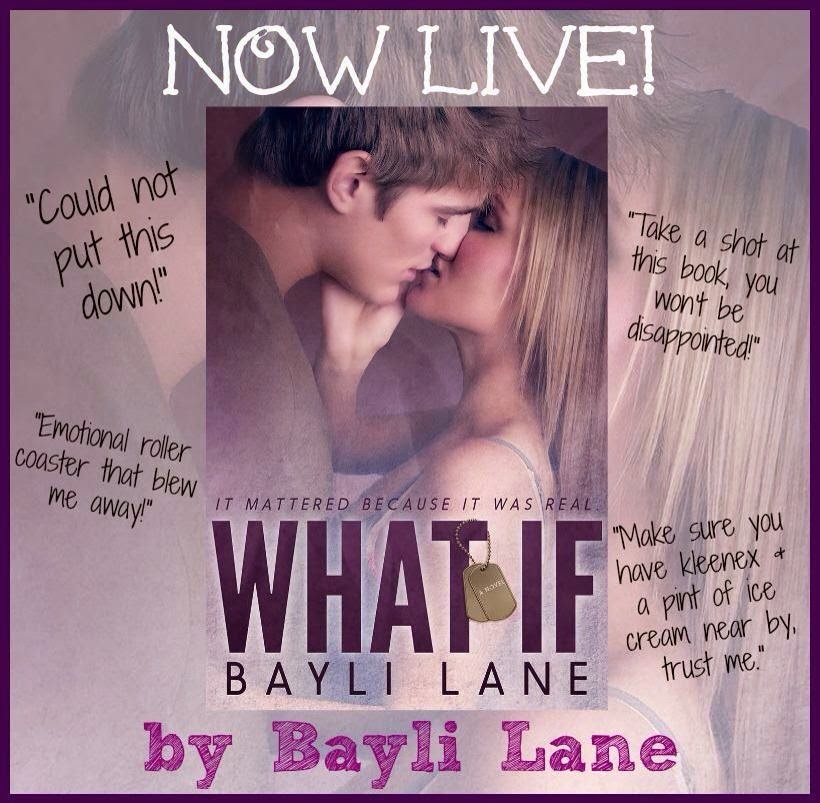 Posted by Unknown at 9:53 AM No comments:

“If opposites attract, then I am nothing. Because you, you are everything.”
There’s no easy road traveled to such an intense sentiment, one I never dreamt I’d feel….
But I also never planned on Cannon Blackwell climbing aboard my tour bus.

FACEBOOK * TWITTER * AMAZON * GOODREADS
S.E.Hall resides in Arkansas with her husband of 18 years and 4 beautiful daughters. When not in the stands watching her ladies play softball, she enjoys reading and writing. She's also being clutch at Baggo, when it's warm outside!

He rubs his chin between thumb and forefinger and considers me, but in a classy, eyes above the neck kind of way. This time the right brow lifts in contemplation as he slides his tongue back and forth across that enchanting bottom lip. This guy- women worldwide would pay top dollar but for the chance to watch him do anything, Algebra even; trust me. And I’ve learned another telling habit of his, I’m cataloguing strictly in case he does end up on the bus. Left eyebrow up is playful and joking, right brow means serious and analyzing.
“Why don’t you let me try this, since you suck at it? Cannon Blackwell, not a hitchhiker.” He offers his right hand. “And you are?”

Welcome to Fantasy's Bar & Grill, where the hottest thing being served up has nothing to do with what's on the menu. Join Zoey, as she discovers how working with four of the sexiest billionaire bad boys, can change her life. Fired from her last job as a paralegal for not sleeping with the boss, she's was determined that her next position would be nothing but professionalism. What she didn't count on was being surrounding by some of the finest male specimens that ever graced the face of the earth. Discovering they all wanted her in their bed, really didn't help previous goals of keeping things in the work place out of her personal life.

“How long has it been since you allowed someone to pleasure you, Zoey?” My eyes opened in incredulity at Samson’s question.
“That’s,” I fumbled for the right words because it really did throw me off guard, “not something I talk about.”
“Obviously. You’re purring like a kitten in heat, so I’m guessing it’s been a long time.” Leif and Miles continued their massage and I met Samson’s eyes wondering if he was mocking me. He seemed very serious and instead of making me uncomfortable it made me horny. Of course it could be that the two sexy men rubbing my legs had a part in that too.
“It’s been my experience that sex is never good for the woman, so I don’t indulge.” I answered him honestly seeing no reason to be ashamed of how I felt about sexuality. I knew perfectly well just how open he was about the topic.
“Then the men you’ve been with are fucking idiots.” His arms crossed over his bare chest and he studied me. That’s the only way I could describe the way his eyes roamed from head to toe, seeming to take inspection.
“Or maybe men are just selfish assholes who only think about what gets them off?” There was no anger in my voice. I was so relaxed at the moment I couldn’t muster up any.
“I don’t consider myself selfish in that department. What about you guys?” He turned his attention to each of them and I wondered what point he was trying to make.
“Satisfying a woman is always first in my experience.” Leif continued his massage and my legs were very happy at the moment.
“I feel the same. If a woman doesn’t find pleasure in our fucking then I’m obviously not worth her trying again.” Leon called out from the kitchen, and I had to admit he looked very domesticated plating sandwiches.
“I think a woman’s body should be worshiped.” Miles moved his caress down to the soles of my feet and I nearly came undone. I obviously needed the touch of a man more than I thought.
“Words are easy.” This was the strangest conversation to be having while I was laying on a cot with just a towel covering me. Not that I wasn’t accustomed to strange discussions with these men. We’d never focused on me during them though.
“Maybe you should let us show you then.” Samson lowered to his knees at the head of the cot, and his hands moved to my temples, massaging in tiny circular motions.
For a moment their hands felt so incredible on me I was tempted to give in. Then sanity came back. “You’re my bosses. I don’t think us having sex would be a smart decision.” Not to mention having sex with four men wasn’t even possible, was it? Talk about a fantasy that needed to be added to the books.

FACEBOOK / GOODREADS / WEBSITE / TWITTER
Michelle Hughes began her career in writing as a paranormal romance author. In 2009 she released her first book, A Night at Tears of Crimson. In 2011 she was hit with an idea for a romance that had nothing to do with vampires and readers seemed to relate more to the alpha male and virgin romances, so she continued along that line.
Prior to a career in writing she was a singer/songwriter who performed all over the US with a satellite syndicated talent showcase as their host. Michelle lives in Alabama with her husband and five children. Writing is her second love with family always being first. If you’d like to find out more about Michelle, please visit her links.