Becca Simpson is a not so average teenager, and she knows it. In fact, she embraces it. She was chosen to be a Keeper, one who keeps the gates sealed between the magic world and the "normal" world. The only time she isn't safe from the dark creatures of the Other Side is the Dark Hour. Every night, at the same time, the gates between the two worlds open and Becca is left vulnerable until the gate closes and the minions disappear. But that's why she has Erik Manchester. As her Guardian, Erik is in charge of making sure no one, or no thing, comes after her to take her away. Because waiting for her on the Other Side is a tyrannical emperor, looking to use her status to meld the two worlds into one. With Erik, Becca feels safe, but suffocated. There are rules she has to follow in order to keep out of the hands of the emperor. Then Kyne walks into her life and challenges everything she knows. Not only does he know things about the Other Side, but he's from there. And found a way to stay in the normal world without frying.

J.F. Jenkins lives in Minneapolis Minnesota with her husband, son, and two cats. She graduated from Bethel University in 2006 with a degree in Media Communication with minors in both writing and film. When she is not busy writing, she spends her free time playing games, reading, and spending time with her family.
Facebook | Twitter | Goodreads | Tumblr| Pinterest

Neely McIntire’s dreams warn her about the future but will not protect her from the danger hiding in plain sight. On graduation night, she plans to tell her best friend, Hayden Nelson, that she's in love with him. Instead, they argue. Neely's hurt feelings leave her vulnerable, giving her secret admirer, Andrew Huckley, the opportunity to put his mother’s monstrous plan into motion. When Neely gives in to her broken heart and pushes him away, Hayden knows he must fight to recapture the spark he felt in their last kiss. But will he find her in time to reverse the damage or will she be changed forever?

Want a glimpse into the book? Check out this head to fingertip outfit of Neely's! You even get the real life Tarma necklace from the book. (And guess what? Author K.D. Wood actually wears this necklace and earrings every day.) And If you haven't read the first chapter on Wattpad, go READ and you'll see what I mean. :) Chapter One

K.D. Wood lives in north Mississippi with her family and a very spoiled White Waug. When not in her office pounding the keys she can be found under a snuggly blanket, cup of donut shop close by with her nose in a book. Follow her on Twitter at @KDWoodauthor, like her on Facebook, you’ll find her neglecting her blog at K.D.Woodauthor.blogspot.com, or email her at K.D.Woodauthor@gmail.com

Posted by Unknown at 9:52 AM No comments:

Posted by Unknown at 7:38 AM No comments: 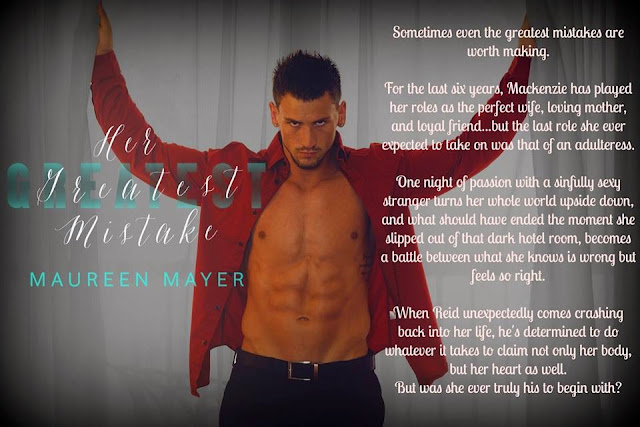 SYNOPSIS:Sometimes even the greatest mistakes are worth making.For the last six years, Mackenzie has played her roles as the perfect wife, loving mother, and loyal friend...but the last role she ever expected to take on was that of an adulteress.One night of passion with a sinfully sexy stranger turns her whole world upside down, and what should have ended the moment she slipped out of that dark hotel room, becomes a battle between what she knows is wrong but feels so right.When Reid unexpectedly comes crashing back into her life, he's determined to do whatever it takes to claim not only her body, but her heart as well. But was she ever truly his to begin with?Be sure to add it to your TBR list on Goodreads!http://bit.ly/10QTIqF

MODEL: Shawn Dawson PHOTOGRAPHER: Furious Fotog
Posted by Unknown at 7:27 AM No comments:

Poppy (Behind the Words #3) by Savannah Stewart

Poppy Taylor is a successful hair, makeup, and clothing stylist with a client list packed full of elite musicians, actors, and celebrities. After months of touring with the bands, The Daughters of Darkness and the platinum selling rock group, From Yesterday, one final night changes everything. Will love evade her, as always, or will she find it in the least likely of places, in the arms of a rebellious rocker she never expected?

Riley Huntington is the bass guitar player for the rock band, From Yesterday. His bad boy exterior isn’t exactly the lifestyle he lives though. With his longtime relationship on the rocks, Riley finds himself alone and full of new feelings for a girl he never saw coming. When life gives him a chance to start fresh, will he take it?

When two unlikely people are thrown together during one night of passion, will sparks ignite a long-lasting fire, or will the temporary flame burn out before it ever has a chance to catch? 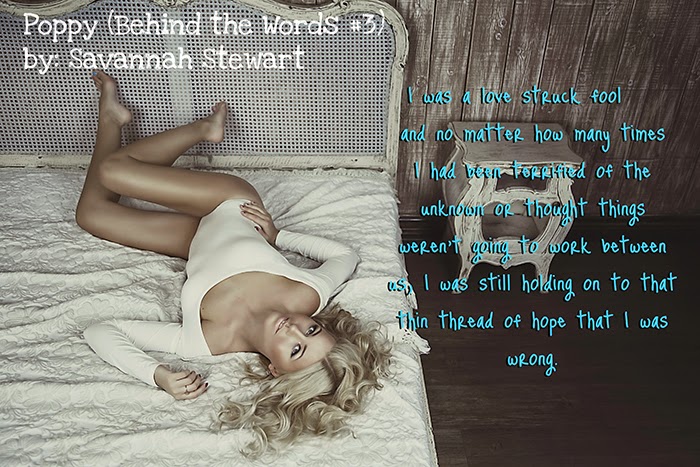 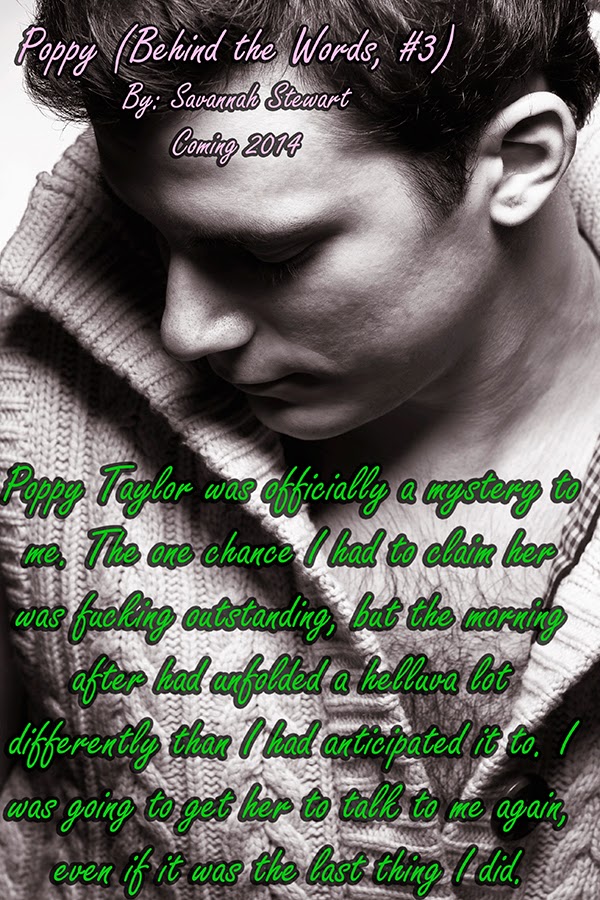 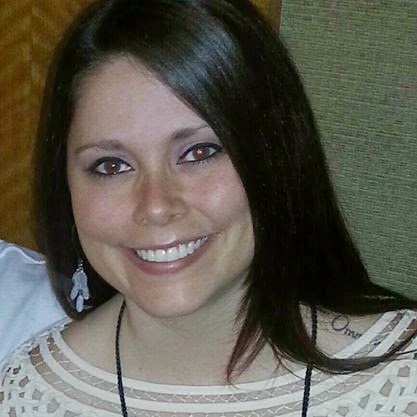 From the Most Beautiful Small Town of America & the Bourbon Capital of the World, Bardstown, Kentucky, Savannah Stewart writes Contemporary Romance, New Adult, and Romantic Suspense novels. She is very much a Leo, with one fur baby named, Jack. She's a Book-a-holic who loves music, tattoos, photography, singing, writing, & laughing. One of her favorite quotes is "Love is the beauty of the soul." 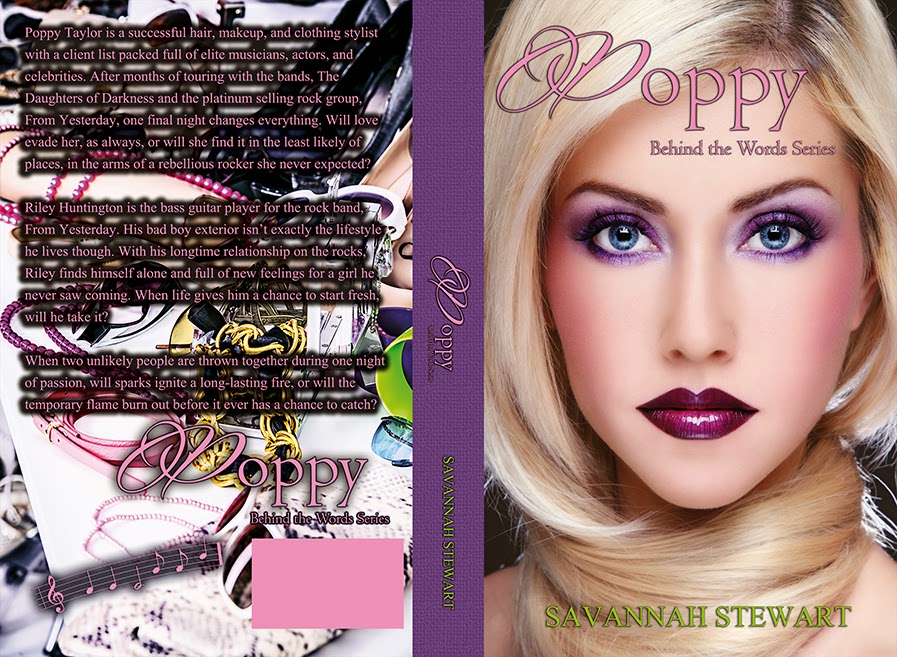