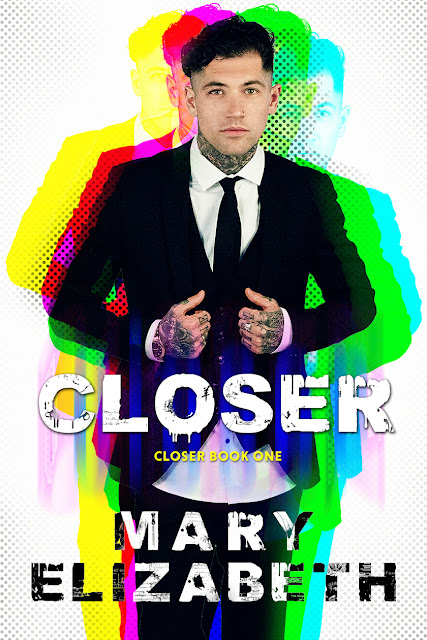 Misery loves company, and that’s exactly what Ella gets the afternoon her path crosses with Teller’s: the misunderstood premed student who instantly becomes her lifeline when she moves to Los Angeles, an attempt at escaping her heartbreaking past.

In the beginning, Lonely and Defensive complete each other. But in the end, their relationship is like broken glass—cutthroat and jagged.

Calling it off before they kill each other, Ella and Teller decide to “just be friends” despite the intensity that binds them together. It’s a delicate foundation rocked by tragedy, effectively destroying the illusion they’ve so carefully built.

Unable to deny what’s between them any longer, this is what happens when wrecked and damaged collide and close is still not close enough. 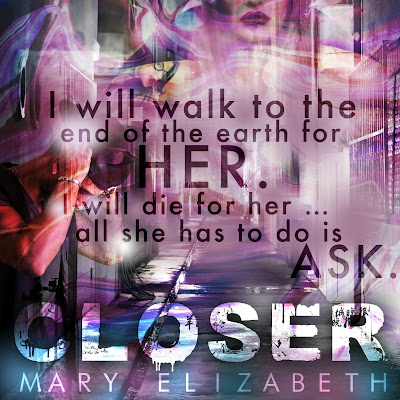 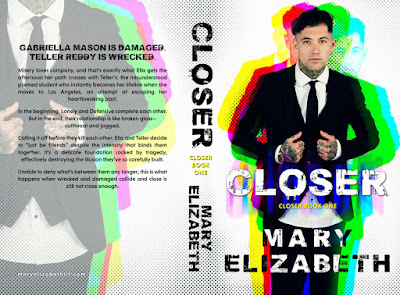 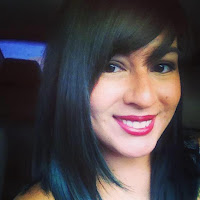 Mary Elizabeth is an up and coming author who finds words in chaos, writing stories about the skeletons hanging in your closets.

Known as The Realist, Mary was born and raised in Southern California. She is a wife, mother of four beautiful children, and dog tamer to one enthusiastic Pit Bull and a prissy Chihuahua. She's a hairstylist by day but contemporary fiction, new adult author by night. Mary can often be found finger twirling her hair and chewing on a stick of licorice while writing and rewriting a sentence over and over until it's perfect. She discovered her talent for tale-telling accidentally, but literature is in her chokehold. And she's not letting go until every story is told.

Colin Malloy enjoys spending Christmas with his family at the Malloy ranch. But this holiday, what he really wants to do is to get closer to the alluring Dr. Anita Cross. So when a blizzard conspires to keep her from joining the Malloy family’s festivities, neither snow, sleet nor spun-out-cars will prevent Colin from reaching her side.
As the new doctor in town Anita is wholeheartedly devoted to her patients. So when a little boy needs her on this snowy night, she doesn’t hesitate to care for him and send him home in time to spend Christmas with his family. An evening with a certain sexy cowboy will have to wait—or so she thinks. When a breathless Colin Malloy shows up at her clinic, Anita finds her cold, lonely night quickly heating up. And no crisis or well-meaning relative will stop them from making this a Christmas to remember.

New York Times bestselling author R.C. Ryan has written more than ninety novels, both contemporary and historical. Quite an accomplishment for someone who, after her fifth child started school, gave herself the gift of an hour a day to follow her dream to become a writer.
In a career spanning more than twenty years, Ms. Ryan has given dozens of radio, television, and print interviews across the country and Canada, and has been quoted in such diverse publications as the Wall Street Journal and Cosmopolitan. She has also appeared on CNN News, and Good Morning America.
R.C. Ryan is a pseudonym of New York Times bestselling author Ruth Ryan Langan.

Staff Sergeant Pierce is everything Ella Gibson doesn’t want in a man, dominant, dangerous, and a member of the Special Forces. But his determination demolishes her resistance.
Ella Gibson is dating with a purpose. She’s got a good job, a car, a townhome. The only thing missing is the perfect man. After having her heart broken, she’s decided that Mr. Perfect will be steady and solid and come home at the end of the day. Bonus points if he’s a sexy Dom. A little kink is the only thing she really misses from her last relationship.
But when her best friend’s older brother, the sexy Staff Sergeant Pierce Holden, interrupts her flirtation with a successful attorney, she’s furious.
Pierce is intent on saving her from a making a mistake. Yet she knows that giving into the temptation of being with him would be an even bigger one.
She’s had a crush on the hero for years. But he’s everything she doesn’t want in a man. Not only is he in the military, he’s a member off an elite Special Forces team. He goes on harrowing missions, and danger is his constant companion.
The more she tries to resist him, the deeper she falls in love. One thing she is sure of, she’s helpless to resist the dominant man’s determination to have her.

Sierra was born in Manchester, England where she spent her early years traipsing through castles. After living in Denver for a number of years, the internationally acclaimed author now resides in Galveston, Texas. She loves the way history blends with Southern manners (being called "sugar" is an experience unto itself).
She invites you to join her on a sensual journey where the limits are explored and expanded.