When Hospice Nurse, Birdie Larkin loses two of her favorite patients back to back, she decides to take a leave of absence and spend summer with her sister in New Mexico. The only thing on her mind is relaxation, reconnection with her family, and healing. Fate has other plans. From the minute, she meets Clue, a connection forms. Undeniable, all consuming and complicated, their bond lands her neck deep in his struggle to deal with his mother’s failing health. To have the future she once dreamed of, she must face the ghosts of her past and have the courage to move toward the future.

“Clue “Nigel Gibson is drowning. Caring for his cancer-stricken mother, dealing with grief, and handling Dueling Devil’s MC business has stretched him to the breaking point. When his mother opts to end her Chemo treatment, he’s thrust into a world of darkness, anger, and confusion. Then Birdie appears bringing hope, clarity, and a chance at love. The innocent girl sparks emotions inside him, he’s never experienced. Determined to claim her, he sets out to show her how a real man treats his woman.

If they can both hold on through the tough times, they’ll find that pain does end.

Shyla Colt grew up in Cincinnati, Ohio, but has lived a variety of different places thanks to her wanderlust, interesting careers, and marriage to a United States Marine. She's always loved books and wrote her very first novel at the age of fifteen. She keeps a copy of her first submission letter on her desk for inspiration.

After a lifetime of traveling, she settled down and knew her time had come to write. Diving into her new career like she does everything else, with enthusiasm, research and a lot of prayers, she had her first book published in June of 2011. As a full-time writer, stay at home mother, and wife, there's never a dull moment in her household.

She weaves her tales in spare moments and the evenings with a cup of coffee or tea at her side and the characters in her head for company. A self-professed rebel with a pen. Her goal is to diversify romance as she continues to genre hop, and offer up strong female characters.
You can interact with Shyla Colt online via her Website on, Facebook and Twitter

Grace loves her new life as a traveling therapist and nurse. She’s in charge and is relishing in the freedom. She’s seeing the country, meeting new people and doing new things. She’s happy. Almost.
Imagine her surprise when she’s called for an interview in California. Overlooking the ocean. In a mansion. No, not a mansion, a compound with guest cottages bigger than a normal person’s house. She knows she’ll love the job, if she can pass the interview with the queen of all bitches and her husband, a famous billionaire.
Then she meets their son. Link Duffy. He's tough, bitter, and seeking revenge. His entire life was changed in an instant, and he's hurt and mad as hell. But there's something about him. Something so raw and fierce. And vulnerable. And sexy as hell. And when he looks at her, she knows their destinies collided for a reason.
Destinies Collide is the second novella in the Badass series, a hot billionaire military romance. You should read the series in this order:
Badass: The Prequel
Badass: Collision Course
Badass: Destinies Collide

Leslie Johnson
Leslie is a California native but recently moved to Arizona after a stint in Arkansas. She enjoys travel and being with friends.
She is an avid reader of many genres, but prefers romances with travel or thriller themes. She loves writing about strong women and strong men because the world needs both!
Elle Dawson
Sharing ones thoughts on paper is an intimate experience, and should not be taken lightly. Some days I fear this process, as my mind can be a scary place to dwell. Other days I realize I’m not alone in this journey, and although the very action of expelling ones deepest thoughts onto paper is intensely personal, it is deeply healing. Funny how that works.
I will continue to write as Elle Dawson, and be a mom, sister, daughter and friend in my real life. I'll enjoy the beauty of Tennessee and read books that take me away or speed up my heart. When I'm not writing them. 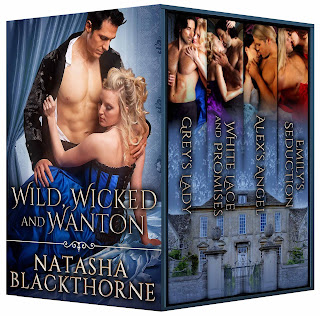 White Lace and Promises
New York Merchant Prince Grey Sexton loves the audacious, spirited young temptress who seduced him in a Philadelphia bookseller’s and made passionate love to him in his carriage. Her fiery nature broke through his cold self-protection.

Beth McConnell loves her husband-to-be very much, yet she wonders if she will ever be able to present herself as the respectable lady he needs for his wife.

What started out as a secret, tumultuous affair has blossomed into something neither of them can live without. But under the strains created by the differences in their social rank, they begin to have serious doubts about the future. And dark secrets from their past threaten to tear them apart.

Can their love prevail? 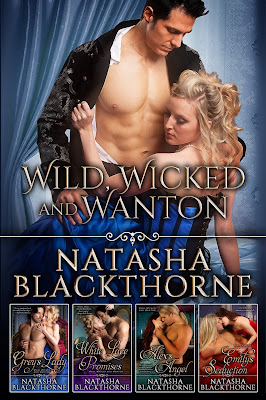 Natasha Blackthorne writes hot & sensual Erotic Historical Romance where deeply flawed characters find love & trust. Her stories are most frequently about the intimate journey of the characters as they learn to open their hearts to love.
Natasha’s heroines are not perfect ladies. They are wildflowers and wallflowers who flirt with the forbidden. Whether they are bold or shy, these heroines’ strong desires and deep emotions drive the plot and drive their heroes to the point of no return. Natasha’s heroes are strong and dominant and live their lives with strength and purpose. They support their women in everything.
Natasha holds a B.A. in History, loves reading, cats and music. Readers are welcomed to Friend her on Facebook where she is most socially active online.