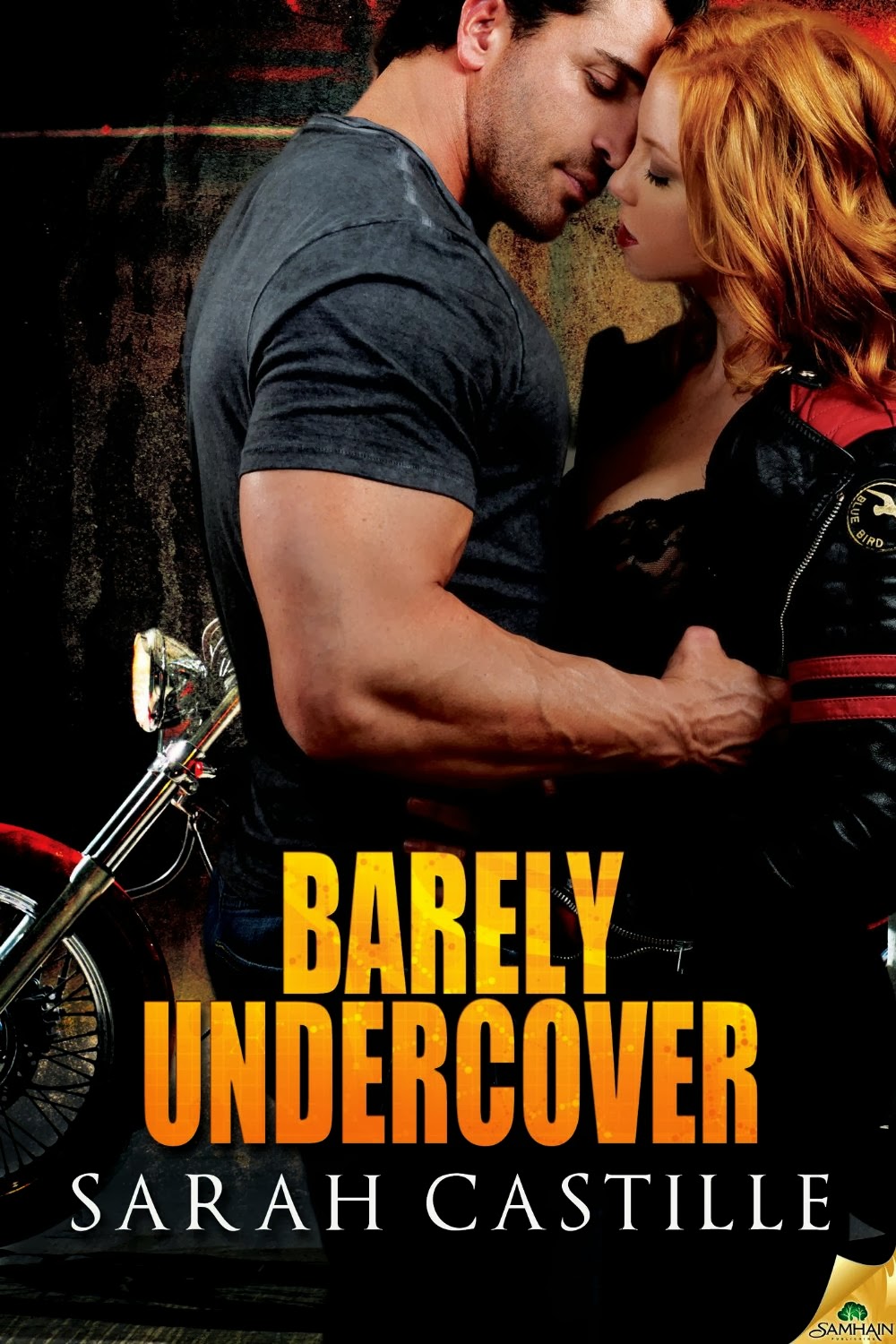 Review by Tonya: If you’re into hot, dangerous, alpha biker /undercover cop, suspenseful, erotic, romance novels, this is the book for you.
Lana Parker is a strong-willed, red- headed, feisty private investigator with a stubborn streak and mouth that gets her in trouble from time to time. When her client, Angel, wife of the leader of Hades biker club, wants out of the biker life, she willingly accepts to investigate her husband. While undercover and trying to get the goods on Rex at the adult club, Carpe Noctem, she ends up on the receiving end of his unwanted attention.  As she tries to get the situation under control, a blast from her comes to her rescue. James Hunter, an undercover cop that she was hot and heavy with two years prior. He is now going by the name “Ice” and is part of the Hades biker club.
To protect Lana from Rex’s attempts and keep his cover intact, James tells Hades that Lana is his “old lady”, Roxie.  Lana realizes that James a.k.a. “Ice” is undercover in the Hades gang. While he tries to protect her from Rex, tempers flare and sparks fly between them. He makes a deal to give her one chance to get her pictures she needs as long as she does it his way. The problem is, Lana is still hurt from James (Heartless Bastard) leaving her without an explanation two years ago and she is running from a secretive past – this equals stubborn Lana.
Through the twists and turns of the story, can Lana forgive the Heartless Bastard for leaving her two years ago without a goodbye? Can she out run her haunting past with all the memories resurfacing?  Can James get over his commitment issues and have a relationship with the one woman who he may be able to have it all with? What will happen when her past collides with their present, will she run, will he chase her?
This book was hot; the chemistry between Lana and James was great and the supporting characters were just as amazing as the main characters. This is book two of the Legal Heat Series, but can be read as a standalone.

Posted by Unknown at 4:52 PM No comments: 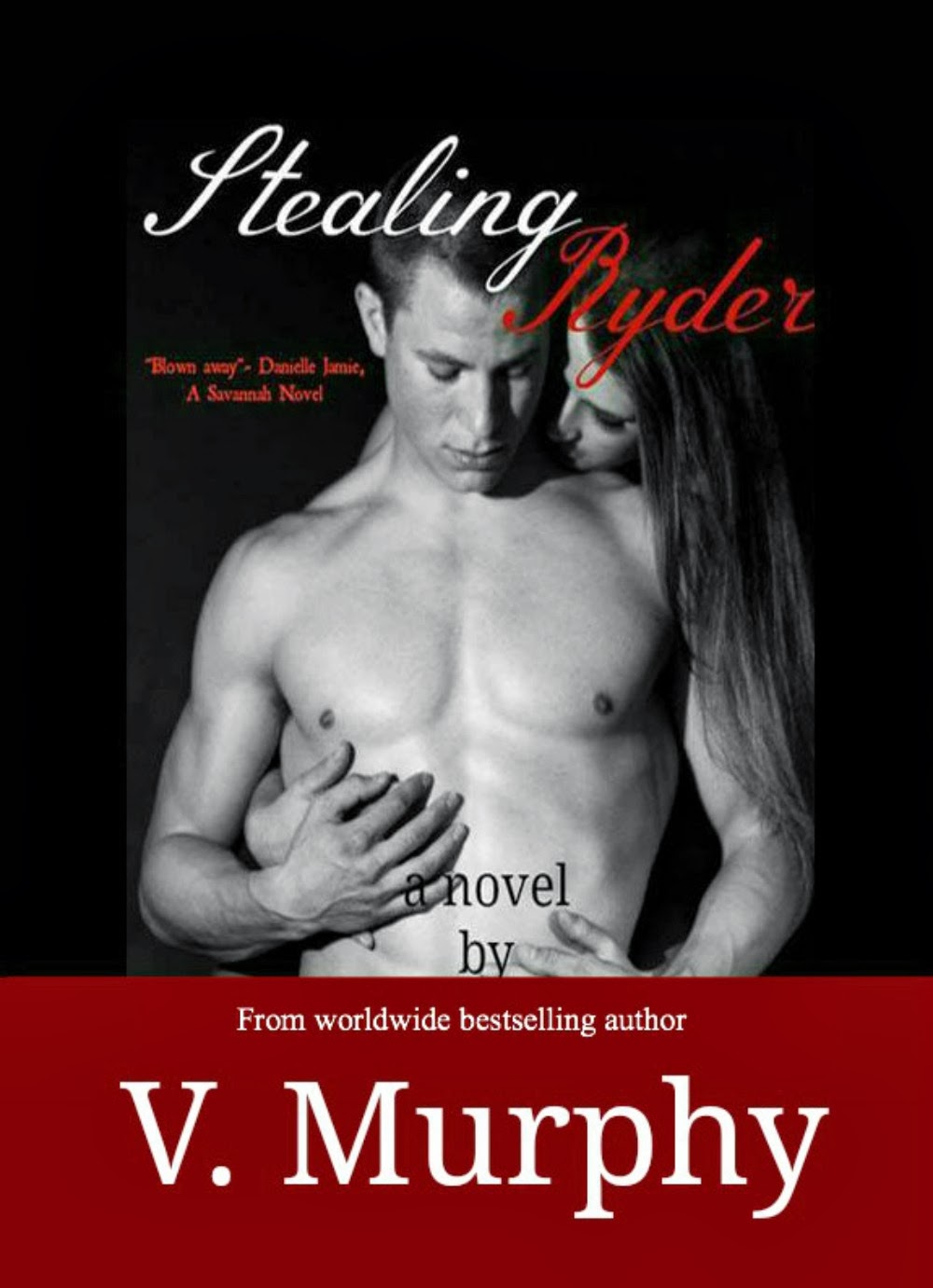 “I will pick up the pieces of your past and steal your heart forever, Ryder."She stole his heart in Sharing Harper but will he be able to change his bad boy ways and do everything he can to prevent his ex and his family from destroying their relationship before it even begins?Ryder Kent, 28, comes from a broken past full of secrets, suffering and a shattered marriage. His daughter, Evelyn, is his entire life until he met Harper, 21, a few months ago and everything changed. Harper is the reason he wakes up in the morning, but no one can seemingly accept this from his past. The pain he suffered years ago comes back to surface and Harper will have to work to save their relationship from ending.Will Harper & Ryder be able to save their relationship and overcome the challenges they face or will they end up broken in the shadows of the past?Follow Harper & Ryder on their continued journey in Stealing Ryder. 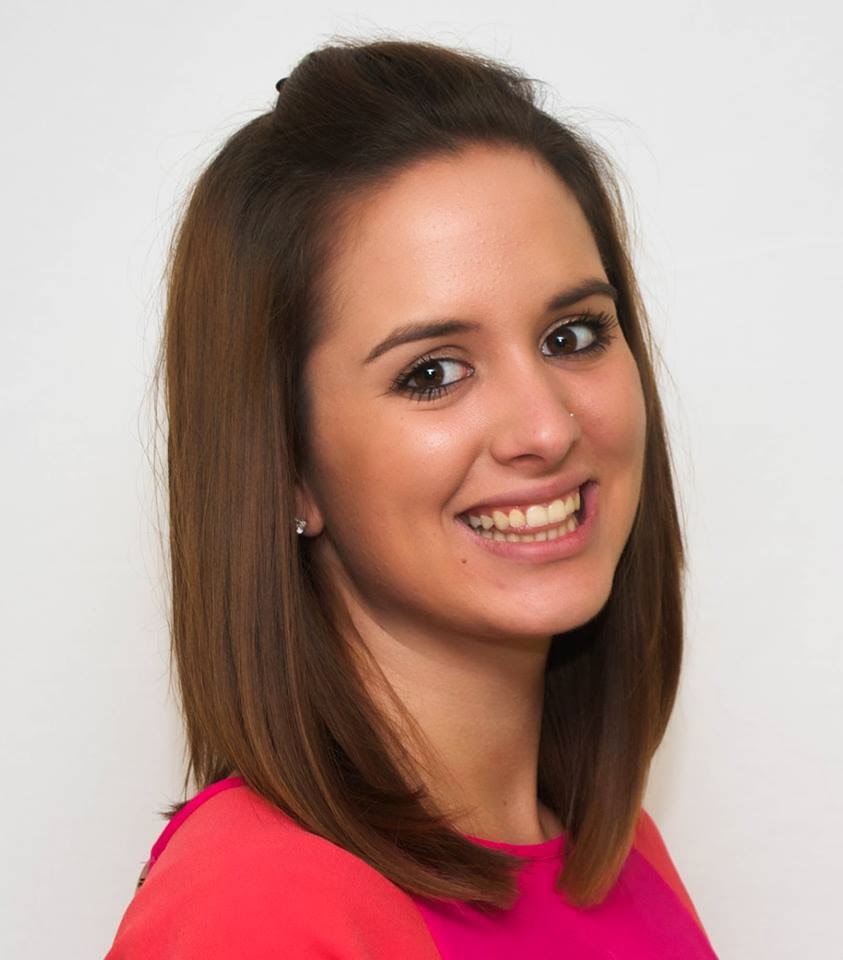 Hi! I am V. Murphy and I love everything about reading (some may call me a bibliophile). I am a current graduate from the University of Illinois Urbana-Champaign and heading out west to live the California dream while pursuing my masters degree in school counseling at the University of San Diego. You can find me writing in a Panera, small coffeeshop or on campus. When I am not spending my time in school or reading, I love to write, bake and shop. Thank you for taking your time to pick up and read my story. I hope you loved it as much as I have loved writing it for you. If you would like to know more about me and the books in progress, look me up on the ‘net.Facebook:www.facebook.com/VMurphyAuthorTwitter: www.twitter.com/vmurphy16Email: vmmurphy4@gmail.com

Posted by Unknown at 4:22 AM No comments: 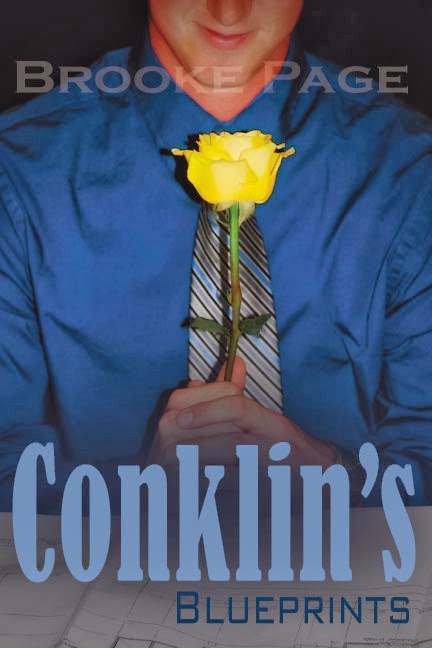 Recent graduate Becca Stine’s all to perfect and predictable life went spiraling out of control when her supposed childhood friend committed the ultimate betrayal.  Following college, Becca attempts to bury the pain by retreating into a dangerous lifestyle with her best friend, Jamie Rae.  She decides it’s time to grow up after being irresponsible, broken, and out of control.  To Becca’s horror, her only option is to return to her hometown of Grand Rapids.  Worried she will forever live in the shadow of her prominent family’s notability, Becca decides moving is her only opportunity to get her feet back on the ground.  With her best friend in tow, Becca reluctantly heads home to attempt to live her ideal life.
Little does Becca know the owner of the architecture firm she lands a job with has an intriguingly mysterious son.  Tyler Conklin is infatuated with Becca, yet is apprehensive about a public relationship because of his hidden baggage.  Not wanting anyone to know about his slight obsession with her, their potential relationship must be kept a secret.  Will Becca put up with Tyler’s untold story for long?  Will she tolerate being his secret? 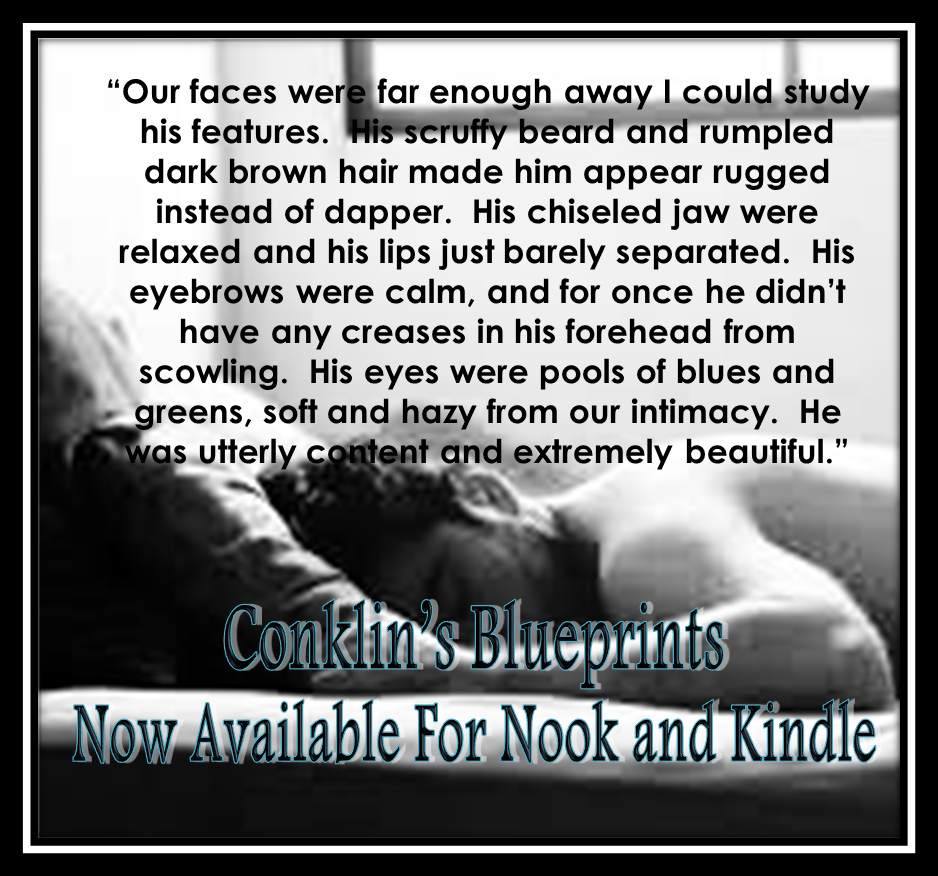 “Let me call a cab quick,” Tyler said, reaching for his pocket.
I gently touched his arm and said, “It’s not too cold, let’s walk.  My place isn’t that far away.”
He looked me up and down and raised an eyebrow.  “Are you sure?  I don’t want to have to carry you half way,” he teased.
“Ha ha ha, I will be fine, and… I’m not wearing heels,” I snickered, lifting my foot and wiggling my toes as though if could see them.
He tried to hide his amusement.  “Okay, if you say so.”
We slowly walked downtown amongst the young crowds of clubbers.  I snaked my arm threw his and leaned my head on his shoulder as we walked.  He flinched at first, but then relaxed into me.
We stopped in the park along the railing, just as we had the first night we went to the coffee shop.  I leaned into him, hoping he would wrap his arms around me.  I felt so comfortable and confident with alcohol running through me.  He shook his head and chuckled.  Sliding his fingers up and down my arms he said, “You’re funny when you are drunk.”
I pulled my head back and looked up at him.  “I am so not drunk yet,” I said seriously at first then let out a little giggle.  He smiled down at me, our faces nearly inches from each other’s.  His expression became serious, and his hands slowed running up and down my arms, stopping on my forearms.  I never wanted anyone to kiss me so badly.  I leaned up and closed my eyes, hoping he would get the picture.  I felt his nose touch mine then his mouth was on mine.  My lips were no longer tingling from the alcohol but tingling from the sensation of his lips working against mine.  I allowed his tongue access to my mouth as a slow low groan escaped him.  It was like he flicked a switch inside of me with his tongue.  I brought my arms up to his head and ran my fingers through his hair.  Our bodies flushed together, I noticed his arms were still at his sides.  Why wasn’t he touching me?
He slowed down the kiss and gently pulled away, keeping his forehead on mine.  I was still breathing heavy.
“I need to get you home,” his voice was raspy, with ulterior meaning.  I slowly opened my eyes and turned to start walking.  He took my hand and squeezed it, causing me to pick up my pace.  He wanted to be alone with me just as badly.  I could feel it in his kiss. 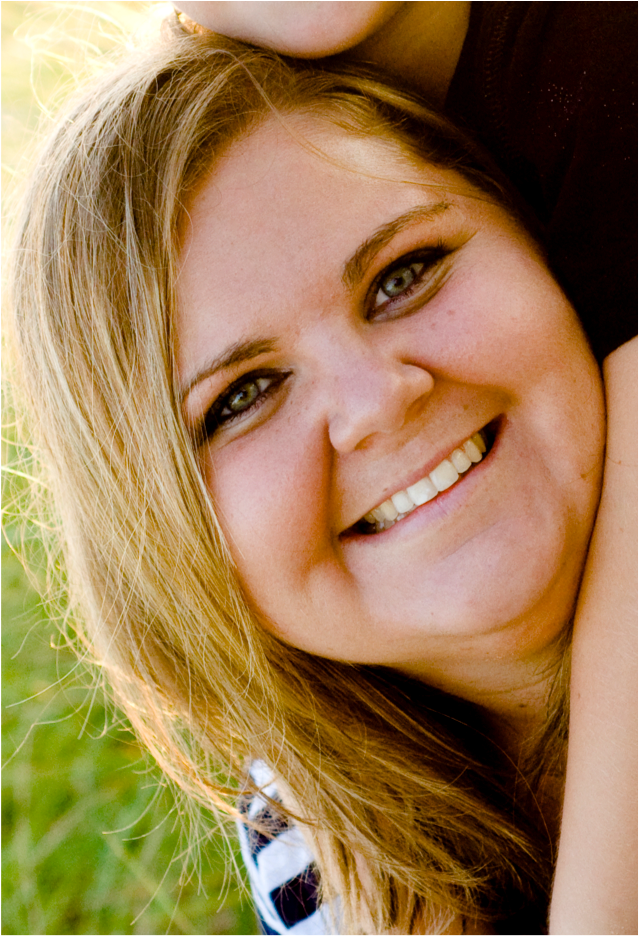 Brooke Page is a newly Independent author of Conklin’s Blueprints.  She and her husband live with their two children in the suburbs of Grand Rapids, Michigan.  When she is not writing or spending time with her beloved family, she enjoys using the pottery wheel and reading.  For more projects and insights on upcoming books and events, please visit Brooke Page on Facebook (www.facebook.com/authorbrookepage), and follow her on Twitter, (@BrookePage05).  Brooke Page would also love to hear from you via her email address if you have any questions or comments about her books, authorbrookepage@gmail.com.