Cover Reveal coming to you in... 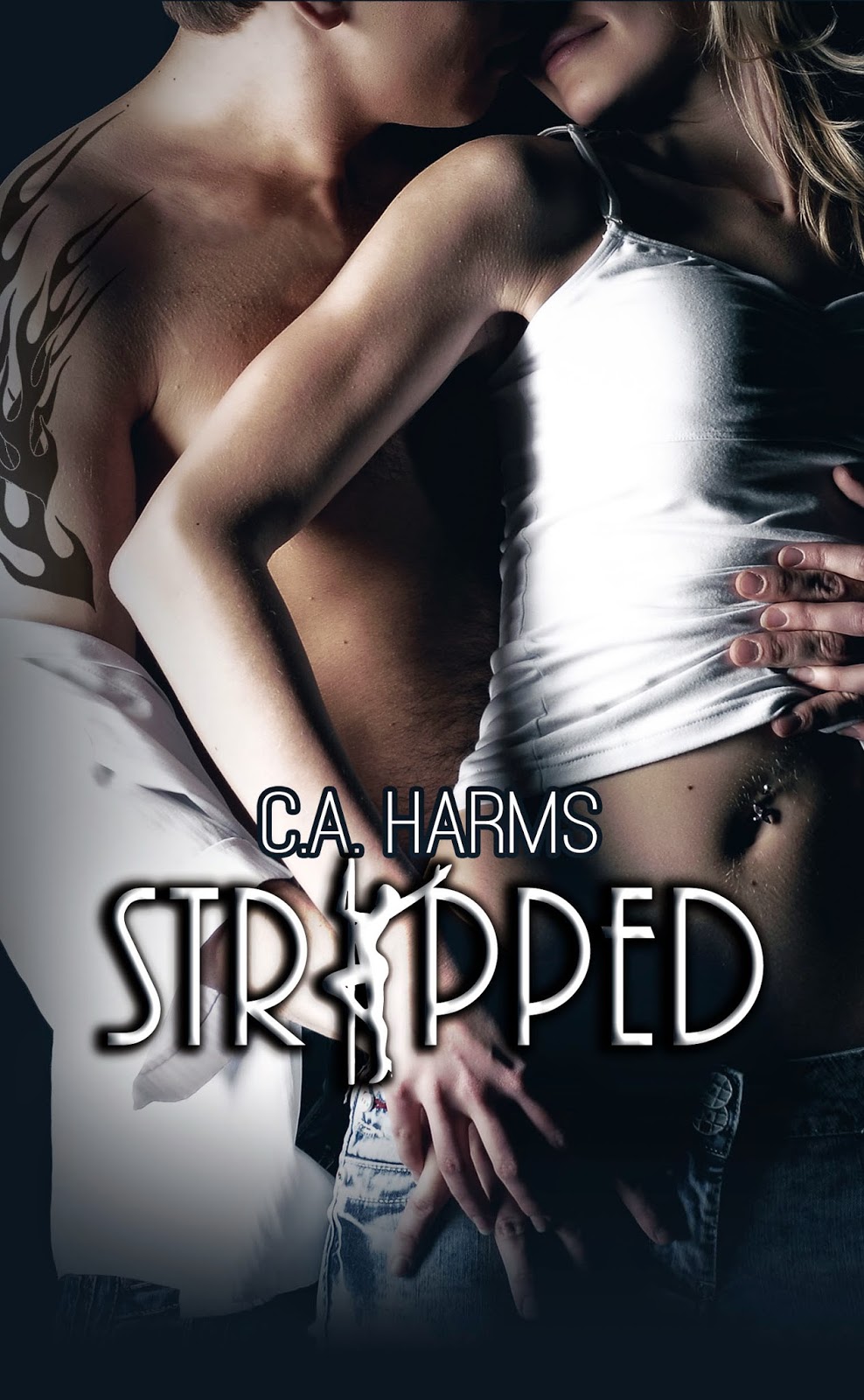 At Twenty Years old Kylie finds herself in a situation she never could've imagined.
She was abandoned by her husband with a five month old baby and a mountain of debt.
She is forced to look for a job, but as a high school drop-out
her chooses are limited.


Kylie had no other choice but to become a Stripper.


While working one night Kylie feels a connection with a handsome stranger.
When she runs into him again the next day, he asks her out, but she knows she doesn't belong in his perfect world.

The problem is Evan can't seem to get the sexy stripper out of his mind.
He knows there is so much more to her and she makes him feel...
Alive


When her past comes... knocking. Evan's trust issues cause him to run
Will Kylie's past continue to sabotage her? Or will she be able to break free once and for all?

TO BE RELEASED SOON! 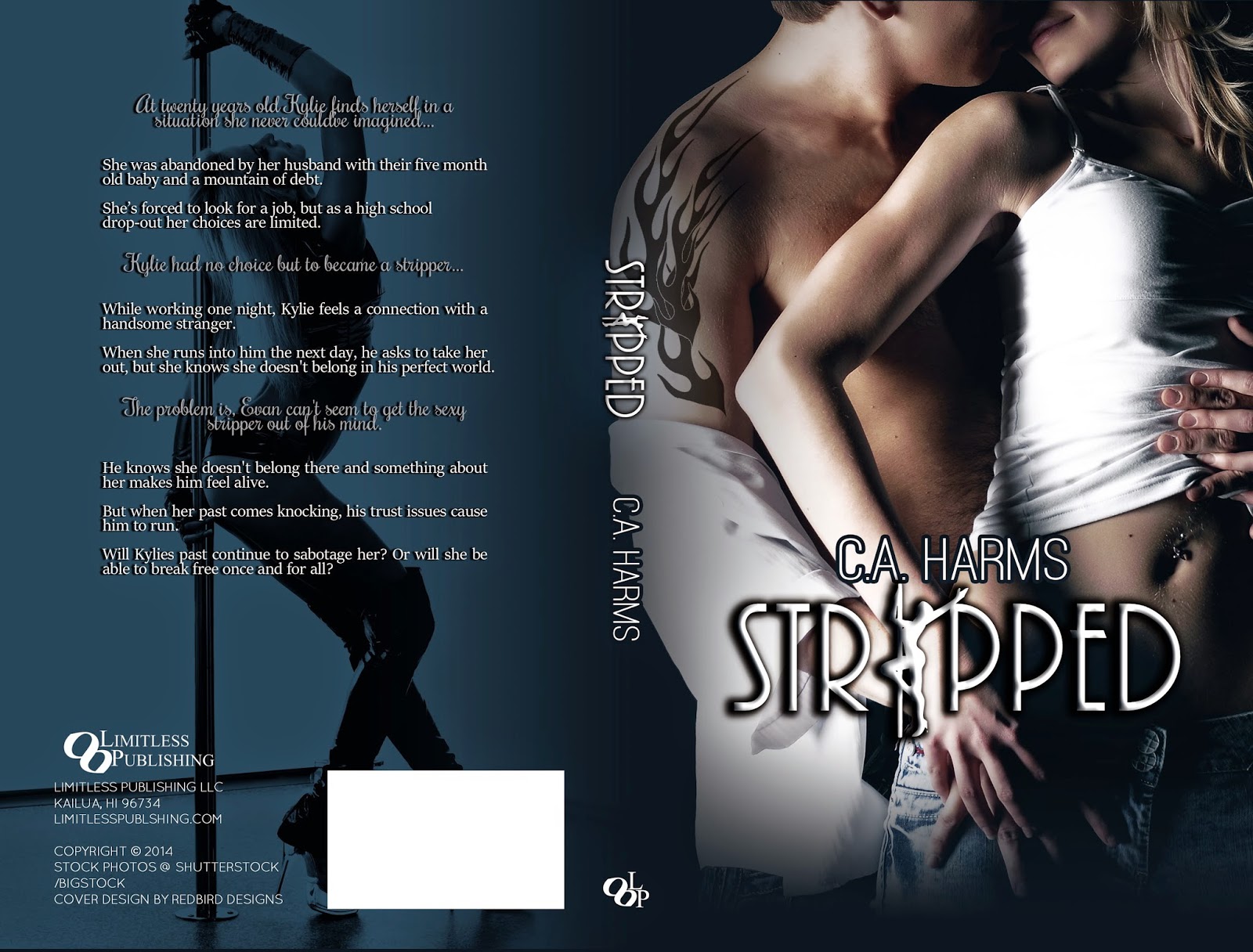 Follow C.A. Harms for Information on all upcoming releases...

Encore by AM Madden Cover Reveal

You’ve read Back-up, you’ve read Front & Center, and you want an encore? Jack and Leila have had to deal with some devious nonsense in their lives. But now, life is real good. Find out what they’ve been up to. Travel into the future with Jack, Leila and all their friends. Put to rest your questions of “What happened to…” If you are looking for heartbreak, angst or drama, look elsewhere. Encore is meant to produce a long and breathy sigh. I hope you enjoyed the journey of these amazing people half as much as I enjoyed creating it. Happy Reading! xo AM

A.M. Madden's debut novel Back-up is the first of three in The Back-Up Series. Book 2, Front & Center is also available on Amazon. Book 3, Encore will be released June 2014. A.M. Madden is a wife, a mother, an avid reader of romance novels and now an author. In Back-up she aspired to create a fun, sexy, realistic romantic story. She wanted to create characters that the reader could relate to and feel as if they knew personally. A self-proclaimed hopeless romantic, she loves getting lost in a good book. She also uses every free moment of her time writing, while raising teenage boys.

Purchase Her Other Books Today

Synopsis Project Sapphire: The World’s first AI. A top-secret project exposed to a select group of scientists. Lei Heaton, a man desperate to save his daughter, is at the top of the bionics empire. He not only hired the team to repair his daughter’s damaged body, he plans to reanimate her dead mind using the Sapphire AI. A dangerous man—a killer that is no regular human… Maxwell Landon—codename: Deimos—is the Adelphi Organization’s top agent. His M.O is simple: Never fail. He's used to annihilating anyone that gets in his way. But this time, he's being called to protect and deliver. Deimos is aware that this mission won't be like any other. Then he lays eyes on the resurrected Ms. Heaton, and instantly he knows: That is not Magdalena Heaton. And he will never be the same again. Control, his most prized possession, is ripped from him with a single glance... The violent attraction he feels for the girl complicates matters immediately. But what Deimos doesn't know is that things are about to get much worse. Sapphire isn't just a completely different person than the dead Ms. Heaton—she's the AI miracle of the century. An advancement that many would kill to own. Including himself, no matter how hard he fights against it. A girl determined to protect her creator. A man determined to protect her... Despite the fact that she is not Magdalena, Sapphire is bent on taking her place as Mr. Heaton's daughter in order to keep her creator safe. Deimos knows that he has to honor her wish. But the thing inside him is demanding more. More than a touch. A lot more than a taste. It responds to everything about her...every stuttered breath that lets him know she wants him as much as he wants her. How does he walk away when he knows that no matter how far he is from her, she’ll always be in danger and he'll always hunger for her?

...
__________________________________________________________________
Excerpt
As well-known as the plant is, it’s only known for its processing of MSW. The perfect cover. No one suspects that a lab is situated three levels below ground. Or that a body was brought back to life with a computer program down there. It bothers me. It's rare that anything bothers me when it comes to a mission. Or life in general. But this one is pricking at me. Curiosity rides me. Gage leans into the car to speak to his team right as one of the back doors of the facility opens. Several Japanese men and women in lab coats exit first. They stop, forming a semi-circle around the entrance and talking amongst themselves. Another black haired man in a lab coat, one that is not Japanese, exits last. I know who he is based on his file. That is Dr. Gordon Allen, the creator of the Sapphire AI. Brilliant, thirty-four years old, and almost no one knows that he’s recently defied God. Whatever the hell it is. He turns back to the door. For a few seconds, all I see is his back. Then, he shifts, enough for me to catch a glimpse of the smaller figure exiting the facility. My feet start moving the moment I do. The fuck if I know why. I’m supposed to wait by the vehicles along with the rest of my team until they lead the “cargo” to us. Gage calls out my name in a low tone. He’s clearly as surprised as I fucking am. I don’t do impulsive moves. Don’t do total loss of body control. I’m doing both right now. My feet eat up the distance in a matter of seconds. The Japanese doctors tense as I storm closer, but none of them try to stop me. For some damn reason, the only thing that matters at the moment is getting close enough to truly see the resurrected Ms. Heaton. I am man on a fucking mission. “When did you do this?” Dr. Allen asks her in a hushed, strained tone. He’s pointing at her long, dark brown hair. The ends were dyed a deep, navy blue. “How did you get the dye?” “I asked for it.” Her voice hits me. God, does it hit me. And I’m sure my reaction is due to the fact that I am ninety-nine percent sure who is talking, and my mind is too fixated on the oddness, the novelty of the situation. I stop right behind Dr. Allen. There’s a pounding rush of adrenaline coursing through me as my pulse fills my ears. “This… this…” Dr. Allen pauses in his stuttering, the movement of his head telling me he’s looking up and down at her. “You should have worn the other outfit.” “I… liked this one better,” she says in a small voice that mounts me, takes over, and reawakens a series of emotions that spring to life like rusty gears. I am not an unfeeling man. Not completely. Fuck no. But the emotions going through me make me feel like I’ve been in an emotional coma the majority of my life. She’s wearing a black button-down sweater, a navy blue school-girl skirt, black-and-white striped knee-highs, and light-brown commando boots that start right below her knee. She’s hugging a messenger bag to her chest, one with a pink-teddy bear on the front and the phrases Reality is a Prison and Sucker Punch beneath it. “This is all too different.” She doesn’t respond to Dr. Allen’s worried statement—she’s staring into my eyes. Looking right at me. That rush—that god damn rush hits me again, and I’m almost dizzy. Years of training are the only thing keeping me somewhat steady.Those big, duo-colored, gold-tinted eyes are wide, curious, and they’ve stolen every bit of processing power within my mind. Her pale skin turns pink and her lips fall open with a shuddering inhale. I can’t blink. I don’t move. Am I even fucking breathing?

N. Isabelle Blanco was born in Queens, NY (USA). At the age of three, due to an odd fascination with studying her mother’s handwriting, she began to read and write. By the time she’d reached kindergarten, she had an extensive vocabulary and her obsession with words began to bleed into every aspect of her life. An avid reader in her teens, her fascination with Japanese anime eventually led her to the universe of fan fiction, which became her on-again, off-again hobby for the next ten years. During that time she amassed a following of fans that, by her own admission, she would never be able to live without. It was those fans who encouraged her to step beyond the fan fiction realm and try her talent in the publishing world. N. Isabelle Blanco spends her days working as an author, web programmer, marketer, and graphic designer. That is when she isn’t handling her “spawn”, as she calls her son, and brainstorming with him about his future career as a comic book illustrator.