Kalin Asen wants to be the best fortune-teller at the infamous Bran Castle in Transylvania this Halloween. It should be a no-brainer…until she crosses paths with a sexy Russian wulfkin who just might be her soul mate. But no way in hell would her fate lie with someone who wants her pack dead. Her mission morphs into a single focus: ignore her uncontrollable urges and stay alive.

As the commander of the Russian wulfkin army, Axe Vuk takes seriously his assignment to get Bran Castle’s ownership signed over to his alpha. But considering the building isn’t actually for sale, he engages a witch to hex everyone into losing their inhibitions in hopes of getting the owner to accept his offer. Then he meets Kalin, and it’s impossible to tell if his growing attraction is a result of the spell or whether she is truly his mate.

When the night takes a deadly turn and his team loses control of their inner wolves, it’s a race against time to stop them from chomping down on every human in the castle. Will Kalin and Axe survive long enough to discover the truth behind their primal passions? 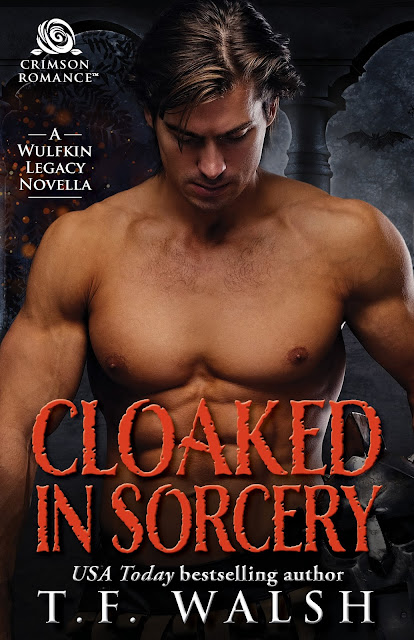 Alarm bells rang in my head. I was face to face with a strange wulfkin in Transylvanian territory. My wolf pressed against my chest, groaning for release, to teach this intruder a thing or two about flirting …
Wait, what? Steady down, girl. He’s the enemy.
Then why did he smell so musky and delicious? And why was he with a human female? The pair emerged from the shadows, the torchlight hitting his piercing golden wolf eyes surrounded by thick lashes. He had the kind of face that would stop anyone in their tracks. Rich brown hair, shorter at the back, with longer strands draped across his brow. Add in his strong and defined face, the perfect ripe lips and … Damn, he was insanely handsome.
“Who are you?” My words came out soft, almost purring. I tried again, coaxing the stronger wulfkin side of me. My attention dipped to his long leather coat, which gave him height but did nothing to conceal his wide shoulders. This wulfkin reminded me of Enre in size, and even his stance was that of a warrior. Ready to battle.
“What are you doing in our territory?” I managed to ask.
The stranger turned to the blond beauty by his side, who wore the brightest red lipstick. Naturally arched eyebrows, blue irises, and high cheekbones added to her attractiveness. The wulfkin mumbled something to her, and I caught the words “check on them.”
The human stared at him longingly, as if she might burst into tears from losing a lover. Just like that, my initial excitement deflated. This was insane. As a wulfkin, I had to protect our land from intruders, not swoon over them. But his scent kept fogging my mind.
When the blonde left his side, she offered me a glare and strolled out of sight behind me.
I returned my attention to the sexy wulfkin and found him prowling close, his hands in the pockets of his jacket, his gaze swallowing me. He stood taller than me by half a foot at least. I chewed on my lower lip, my legs wobbling beneath me. Rational thinking flew on the wind as I pictured myself tasting his lips, having him take his coat off so I could see how big he was—his chest, of course, not his package … Goddess, my face was on fire!
He stopped alongside me, glancing down at me.
A part of me trembled—not because he was the enemy, though that should have been reason enough, but because an inferno had awakened my libido. What was wrong with me?
The wulfkin’s warmth folded around me. My wolf shoved against me, and my gut tingled to high hell, as if I’d collapse any moment from the sensation rattling my core.
His eyes twinkled as he leaned closer and said, “My head’s telling me to toss you over the wall. But my wolf’s demanding I devour you.” His voice grew deep and raspy, sending my blood south so fast, I rocked on my feet. He had me at devour. 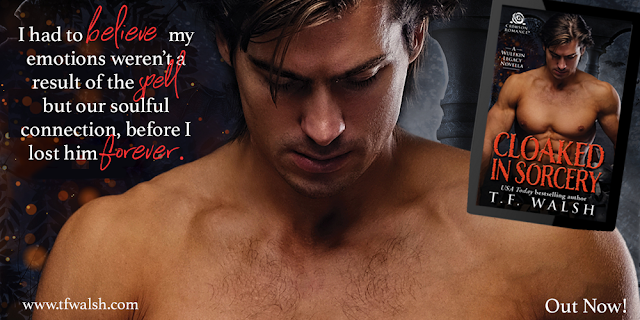 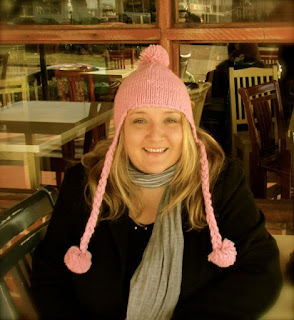