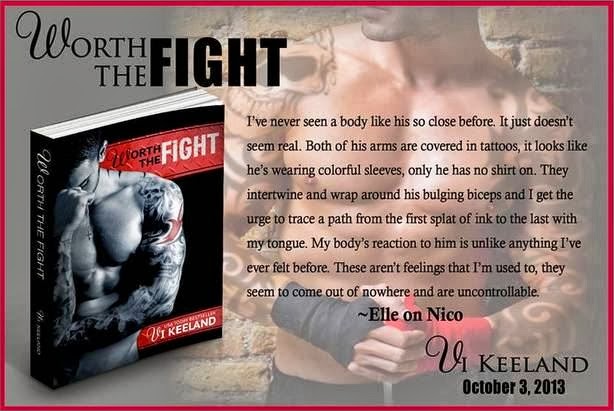 Review: I loved Worth the Fight what a wonderful story! I couldn't put it down once I started it.
We meet Elle a lawyer just living a normal life. She is seeing William at the beginning of the story. William is a handsome man, never complains but he's just so predictable. I could see right away Elle wanted much more. As nice as William is he would be the safe choice for Elle and she wanted much more. Elle is just going through her everyday life when in walks Nicholas Hunter who we soon find out is Nico "The Lady Killer" Hunter a MMA fighter and one HOT hunk of a man! Tan, green eyes, strong and did I mention he drives a motorcycle? <----OMG! Love him! Nico ask Elle to help him out of a contract he is in because he doesn't believe in child labor so he wants out of it. Elle can't help but take notice how good of a man Nico seems right from the start. She is attracted to him but try's to fight it at first. Finally Nico comes back and ask Elle out to dinner, and after that things to evolve. I loved the instant connection these two had. It was hot! We go on a roller coaster with these two. Elle fighting her past and Nico sorting out some of his own demons. Will these two help each other through the pain? Can Elle let down those walls she built so long ago? Read Worth The Fight to find out. I loved it! I don't like giving too much away, but I can say this is worth reading! I give Worth The Fight 5 stars! It had me on the edge of my seat wanting more. Grab a few tissues as well. What a beautiful story of two people putting back together their broken hearts. I loved it from start to finish!  <3 Carrie

Synopsis: It didn’t matter that the ref called it a clean hit. Nico Hunter would never be the same.
Elle has a good life. A job she loves, a great apartment, and the guy she’s been dating for more than two years is a catch and a half. But it’s boring…and she strives to keep it that way. Too many emotions are dangerous. Her own past is living proof of what can happen when you lose control.Then Nico walks into Elle’s office and everything changes…for both of them. But what can the tattooed, hard-bodied MMA fighter and the beautiful and always steady attorney have in common? A lot more than they bargained for. 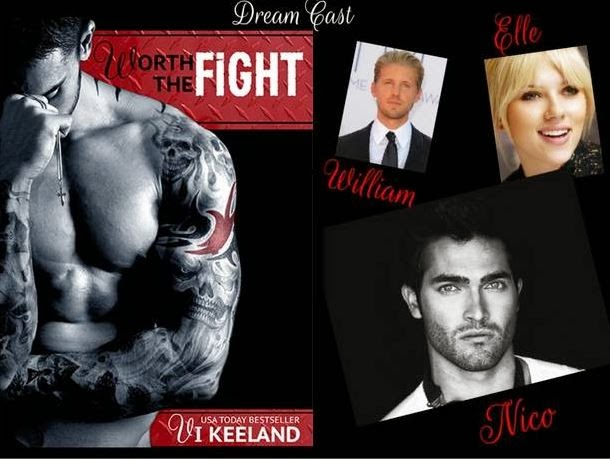 Giveaway: a Rafflecopter giveaway
Posted by Unknown at 5:47 PM No comments: