The story continues...
I trusted Colton with every bit of myself. I believed him when he promised he’d never hurt me. But he broke me…and now I watch him give another woman everything I thought would be mine.
I never saw this coming.
I don’t blame Taylor for the decisions she’s made, because I know the fault is all mine. I took her for granted. I broke her heart.
But she’s everything to me. If the guy holding her now thinks for one second I’ll lay down without a fight, he’s dead wrong.
Because I’m coming after what’s mine. 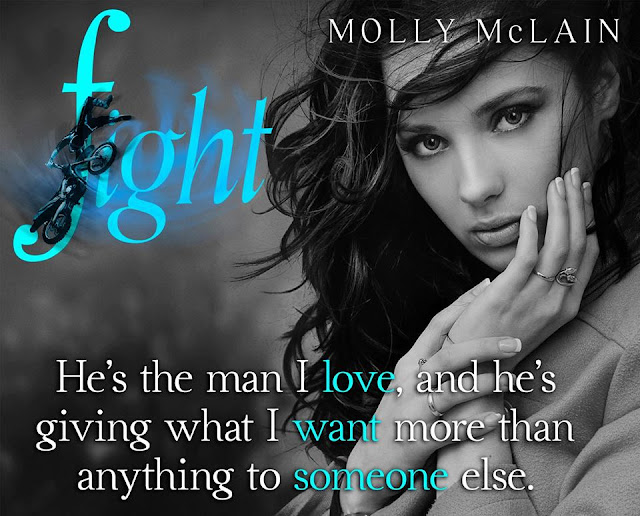 FIGHT (Velocity #2) Exclusive Excerpt
Copyright © 2016 Molly McLain
“Don’t think this means you’re off the hook. I’m just too exhausted to tell you how I really feel.” Taylor tugs me through her apartment, pausing only to grab a pillow and blanket from the couch. I don’t complain. Not only did she let me in, she’s touching me, too.
“Fair enough,” I say, glancing around. The place is definitely a man cave, with a few of her things scattered throughout. It’s not a bad set up, by any means, but it’s obviously his. And I fucking hate it.
“Where’s your roommate?” Since I’m pretty sure he’s the prick who answered her phone last night, I should probably do a little recon.
“Crap.” Taylor stops short in the hall and drops my hand likes it on fire. “He ran out for a minute.”
I don’t like the pink creeping into her cheeks, but I bite my tongue.
“He’s bringing lunch.” She swallows hard. “For the two of us.”
Yep, it’s official—this guy and I are never going to be friends. I keep my mouth shut, though. I don’t have a leg to stand on and I’m damn lucky she didn’t slam the door in my face. I’m sure as hell not going to give her a reason to wish she had.
“Have you eaten?” she asks quietly, and I nod.
“Grabbed breakfast at O’Hare.”
“Good.” She nibbles on her lower lip, looking everywhere but at me. Why?
“You all right?” I’m not sure I want to know what’s going on in her pretty head, but again…I didn’t come all this way to be an ass. I met my quota on that front months ago. “If you’ve changed your mind…”
“No,” she replies quickly. “No, it’s fine. I just…” Her eyes flash to mine for a second. A second just long enough for me to get the point—she’s hiding something. “I don’t want to be rude. Adam’s been really sweet through all of this.”
Sweet? I just fucking bet. “You told him about me?”
“Yeah, Col.” This time, she’s less uncertain. More determined. “I needed someone to talk to while you were living it up with your girlfriend.”
“She’s not my girlfriend.”
“Whatever, Col.”
“Maybe I should meet this guy, then. Thank him for looking after you.”
The color in her cheeks goes as dark as her lips in an instant, and it’s everything I can do not to grunt like a fucking caveman. I’m the guy she’s supposed to open up to. The one who’s supposed to know all of her secrets, not some guy she’s been shacking up for less than a goddamn month.
Suddenly, the door swings open and the smell of food proceeds the bulky dude carrying it in. “Honey, I’m home,” he calls out with a sly grin on his face. A grin that fades the moment he spots me. “Well, shit, Tay, I didn’t know we had company.”
Tay? It’s Tee, motherfucker.

Like many novelists, especially romance writers, my infatuation with a good love story began early. I don’t remember exactly how old I was, but I’ll admit that Barbie and Ken acted more than a couple of the story lines I had in my head (sorry, Mom, but, no, not all of them were kid-appropriate). The obsession continued to grow as I got older and, whenever I left home, I always had a wire-bound notebook and a blue ballpoint pen in hand. In fact, every August, I still get that goofy, schoolgirl itch to buy up oodles of pens and paper, because, while I love my laptop, nothing compares to writing long-hand. If the house is quiet and there’s a thunderstorm rumbling outside, even better.
Not that I have the slightest a clue what a quiet house is anymore. Having three rambunctious (but awesome) kids, a zippy dog and a pesky cat has completely blurred my memory of peace and quiet. Oh, and I have a husband too–I call him the FisherGuy–and he’s probably louder and crazier than all the rest. I think I’ll keep him though. After all, he keeps me in fresh fish year-round (yum!) and he’s good hero material. Did I mention he’s also a firefighter?
We live in Northern Wisconsin and, let me tell ya, living here has provided lots of small-town fodder for this writer’s overactive imagination. Of course, I know no one who’s lived anything close to the steamy experiences I write about (not that I’d tell ya if I did *wink*). There’s something inherently sexy about not knowing what goes on behind closed doors…or even better, letting my imagination run free, concocting all kinds of stories and scenarios and putting them down on paper. Or my laptop.
2014 is going to be a big year for me, as I debut my first novel early in the spring and the majority of the remaining series as the year goes on. I’ll also be releasing at least one, hopefully two, books in a second series. Both are set in small towns and both will feature smart, spunky heroines and sexy, smokin’ hot heroes. Oh, and romance…sometimes sweet and sometimes sizzling.
Website * Facebook * Twitter